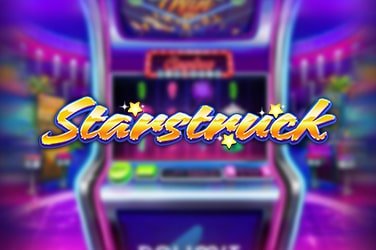 When combing the retro features of old school slots with fresh new features you could wind up with any number of possibilities, but in this instance, we’ve got the Starstruck slot game.

Today, we’re going to see whether or not that combination by Nolimit City pays off.

The sense of tradition and nostalgia is apparent from the word go in the Starstruck slot game with a fun 3×3 reel layout that provides you with just 5 paylines to work with.

The symbols are going to be pretty familiar to those who have been on the slots for many years, too, with clubs, hearts, spades, diamonds, bars and watermelons all making an appearance.

The return to player (RTP) percentage shouldn’t be dismissed as a negative part of the slot experience, if only because so many players still view it with such importance to this very day. That’s going to be the case for the Starstruck slot game also, with the RTP coming in at 96.19%. We’d say that is just below the standard average but with the variance being rated as medium to high, you can expect both a steady stream of wins and the possibility of some fortune for the high rollers out there.

Punters don’t exactly have to be millionaires to begin their Starstruck journey with a minimum stake of $/€/£0.05 and a generous maximum stake of $/€/£100. From that point on it really is anyone’s guess as to what you’re going to win, but if you’re lucky, you’ll be able to walk away with 1,635x your initial stake.

It isn’t the most complex of designs you’ll ever see but it’s sparkly, it’s over the top and it makes us feel like we’re sitting in a packed casino having a great time – which is definitely a good target to aim for in times like this.

The standard wild is the first of the bonus symbols to keep an eye out for but it isn’t the only one, as there is also a multiplying wild in play. They spin in stacks that are five symbols high and can take your winnings up to a 3x multiplier, giving you even bigger rewards.

The other extra is the Starstruck Hot Zone feature which you can activate by landing the bonus star symbol in the middle position on the 2nd reel. Then, you will be offered the choice of eight star symbols, with each one having an instant prize of some description.

The Starstruck slot game moves at a quick pace, has the kind of theming that gives it a feeling of being unique, and provides players with plenty of opportunities to receive some hefty winnings.

That’s the kind of trifecta that often leads to a slot being dubbed a success, and when you combine all of those things with the nostalgic side of things, it’s hard to see where Nolimit City goes wrong with this one.