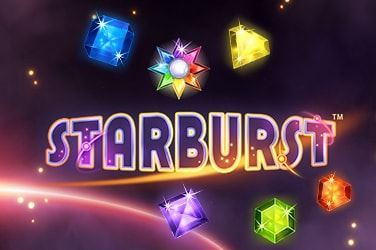 Founded in 1996, Swedish game studio NetEnt is one of the most respected developers of online slot games. One of the games which has helped fuel this success is Starburst. To say it is popular with online casino fans is an understatement!

Starburst is one of the most popular online slots today and it’s popularity has steadily grown since it’s release. This video slot is fun to play, easy to pick up and most importantly the game is enjoyable. If you want to learn more about this well-loved title, we take a closer look at it below.

This review should give you everything you need to make an informed decision on whether or not you should play this great online slot.

This game from NetEnt has 5 reels, 3 rows and 10 pay lines. The number of lines you can play on is easily adjusted with the on-screen ‘Lines’ button. Players can also use the ‘Level’ button to select the stake they will play for per spin.

This is done by changing the coin value which starts at 0.01 and goes all the way up to 1. This makes it perfect for all types of online casino fans to enjoy, however much you wish to bet with.

There is also a handy ‘Autoplay’ button to click if you would like the game to spin for you. This slot also has win both ways tech included which sees you receive a payout if you hit 5, 4 or 3 matching symbols on any adjacent reels starting at reel 1 or 5.

Gameplay is enjoyable with plenty going on to keep you entertained and the number of win lines really help this online slot stand out.

Starburst is also optimised for mobile play, meaning you can play wherever and whenever you want. With mobile casinos gaining constant popularity it’s no surprise that NetEnt has made Starburst accessible on desktop, mobile and tablet.

Although there are no jackpots on offer, don’t let this deter you. Starburst has more than enough features to keep you entertained.

The theme of Starburst is gems, which means this slot is very easy on the eye. The game is made up of different coloured gems and the aim is to match up the same gems on the winlines (these can be seen by hovering your cursor over the dots at the side of the reels). The gems come in 5 varieties:

There are also 3 other symbols that could mean some better winnings. There are the Seven (7) symbol, BAR symbol and the Starburst Wild symbol which is a multicoloured gem that will transform into any gem it needs to match up on a particular winline.

The sound design for Starburst is great, the music and sound effects match the online slot perfectly. It can be seen there has been a lot of time and resources have been put into the overall aesthetics of Starburst, and the looks are just one of the many reasons you should play this modern classic online slot. Starburst truly gives you that classic arcade feeling, which is loved by many.

Hit one or more Starburst Wild symbols on reels 4, 3 or 2 for example and they expand to turn the whole reel into Wild symbols, essentially turning the reel into a ‘Wild Reel’. When in play, any Wild Reels stay locked and you get a free re-spin on it if you manage to land another Wild.

Keep an eye out for these Wild symbols as they could mean big bonuses when you play Starburst.

The 96.10% RTP figure is decent too and leaves you with a good chance of seeing more of the money you put in coming back to you. Starburst is classed as a Low Variance slot which means you get frequent wins but for smaller amounts.

The maximum win on any spin is 500 times your initial stake, which reflects this. The real secret to this slot is how simple the gameplay is, which means you can focus on enjoying yourself and hunting down those wins.

In comparison with other modern slots the Return to Player (RTP) percentage is right up there with some of the best online slots, and being low variance makes it all the more playable.

Although Starburst may be an older online slot, it has sustained and even grown in popularity. This cult classic will deliver you hours of fun, when you give it a try you will realise why this slot has reached cult status.

The visuals are great and will keep you enticed for hours on end. If you’re looking for a no-nonsense slot of high quality, Starburst is the slot for you.

Gameplay is simple but entertaining and most importantly fun. Starburst is well optimised so you won’t have everlasting loading times and the while playing the game you can expect a smooth gaming experience.

Being a Low Variance slot, wins come more frequently and keep you engaged and with such a high RTP rate it’s easy to see why this slot has hit the mark with so many players. The ‘Wilds’ bonus feature makes this game all the more appealing.

Do you want to try this great online out? Why not play with Casino77 where new customers can claim awesome bonuses to use on games like Starburst. Make sure to keep in mind responsible gambling and only ever play with what you can afford to lose. Always gamble responsibly.