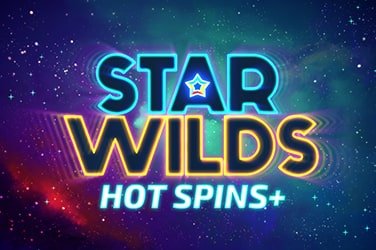 Sometimes when you see such a random assortment of words being thrown together in one sentence, there can only be one meaning behind it – slots.

Today, we’re going to take a look at the enigmatic Star Wilds Hot Spins slot game and see whether or not it lives up to the hype that the name demands.

Set in the deep embers of space, one thing that remains the same about the Star Wilds Hot Spins slot game is that it has a fairly standard reel layout of 5×3 – with 10 paylines to go alongside it.

The retro vibe of the slot is echoed throughout the reels with symbols such as stars, pentagons, triangles, squares, 7s and more.

The return to player (RTP) percentage can’t be undervalued, if only because so many players use it as a guiding light for their own experience. We’re sure the same is going to be true for the Star Wilds Hot Spins slot game with their RTP coming in at a reported 95.93% in the base game. That’s below the industry average but with medium volatility, punters shouldn’t be surprised if they get a consistent run of smaller wins throughout the gameplay.

We really do like the direction they’ve tried to go in here with a futuristic, somewhat comic-book type of styling. Sure, it may not be everyone’s cup of tea, but it’s unique – and with a name as random as this slot you need to stand out amongst the pack.

You’ll want to keep an eye out for the ‘Wild’ symbol, as always, because it can replace any and all other normal symbols on the board.

The main feature that you’ll want to enjoy, though, is the Hot Spins feature. This is triggered when winning 4x your initial stake, which causes the reels to split off into four smaller sets of reels. From there you can keep on spinning, and while that may be a risk, there will be a direct increase in the odds of you receiving some tasty wins.

The number of Hot Spins you receive is determined by the initial victory, and if you land Wilds during the spin, they will then stay on the reels until the feature concludes.

The Star Wilds Hot Spins slot game is a mouthful to say but in terms of the gameplay itself, we really like it. There are really fun bonus features to try and take advantage of, the winnings are decent, and the actual theming itself is a joy to behold. Ironically the name of the actual slot is probably the clunkiest part about it, but aside from that, we can’t think of a reason not to give this a go.