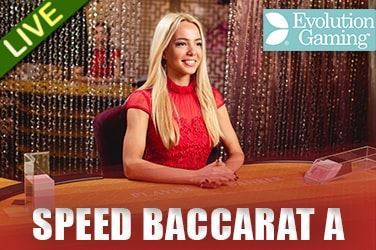 Speed Baccarat is an up-tempo version of the casino classic that millions around the world know and love.

While the traditional baccarat wouldn’t be regarded as a particularly slow game, speed baccarat is certainly a turbo-charged title that breathes an extra layer of excitement to the game.

As far as the rules of speed baccarat are concerned, they are identical to the traditional baccarat, apart from the time between each game. In our regular baccarat games you have around twice as much time as the 11 seconds you have on Speed Baccarat to make your move. The “Move” in the case of baccarat is betting on which pair of cards will have the index value closest to 9, when combined. Each game has two players, the “player” and the “banker” and both these players are dealt two cards face up, with the index number on the cards added together to give an overall total. Depending on the value of the cards, there is also the possibility that one or both players will be able to draw a third card. Once all cards have been dealt, the hand that is closest to 9 wins.

Most cards in the deck have a value that corresponds with the number displayed on the card. So, for example, a five of hearts would be worth 5. However, as picture cards are traditionally worth ten in games such as blackjack, they carry a value of 0 on baccarat and speed baccarat. This is because when the combined value of cards exceeds 9, it reverts back to 0 and the count starts again. An example of this would be if your first card was an 8 and your second was a 4. As the value of these cards make 12, your actual hand value would in fact be 2. So, going back to the role of picture cards, they are effectively worth both 10 and 0 as your index value doesn’t change as a result of a hand receiving one.

Eleven seconds between games isn’t a long time, so we could recommend you having some form of strategy in place that allows you to make quick betting decisions from hand to hand. One way to aid your decision making is to keep a close eye on the table’s history to determine the probability of each hand being a winner in the next game.

Speed baccarat takes a casino classic and gives it a modern twist thanks to its simple time limit tweak. The reduction of the time between games may seem like a small adjustment, but the change makes a world of difference to players who enjoy games such as roulette and blackjack that are traditionally quicker paced, but want to try something different. Does that sound like you? If it does, come and give speed baccarat a try!