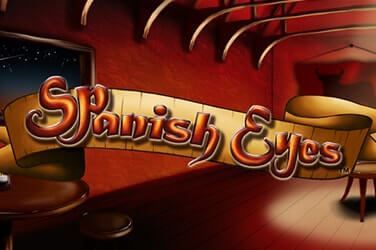 We don’t often take trips to Spain in slot games, so it’s nice to finally see a game that is a love letter to the Iberian peninsula, themed largely around the vibrant tradition of Spanish dancing. Spanish Eyes is as sultry and steamy as you can get in the world of slots, and with a lovely Spanish town as the backdrop and the starry sky behind it’s hard not to get swept up in the romance.

So is this slot a perfectly executed Flamenco, or will you break out the dad moves? Let’s take a look in our Spanish Eyes review.

NetEnt, the developers of this game, are prolific creators of slots on just about every topic and theme imaginable, but even this is a bit different for them. The design of this game really captures the exuberance of Spanish culture, and while it’s set in a sleepy Spanish town with classic orange roof tiles and gaudy lights strung between balconies, it all comes alive when you string together combos of symbols. When this happens expect to be rewarded with Spanish guitar music, flowing petals, dancing girls and clacking castanets: The works.

Speaking of the symbols, you’ll find the lower value ones are taken up by the generic 9 – A icons, though even these have been designed to reflect a Spanish flavour in a baroque style covered in roses. The higher value symbols here are a fan, a set of castanets and a guitar, while a beautiful Spanish dancer and a blooming rose are the Wild and Scatter respectively. The graphics here are good, but not great, and will probably soon look a little dated in comparison to the latest slots on the market.

The layout of this slot is a standard five-reel, three-row arrangement, while there are 25 paylines, which means you should expect lots of small wins rather than a smaller number of large ones. With a minimum bet of £/€/$0.25 and a maximum bet of £/€/$50 it’s not exactly heaven for high rollers, but landing five dancing girls on your reels generates a 10,000x your stake bonus, so it’s nothing to sniff at either. The overall RTP is 95.12%

We said that you shouldn’t expect big wins in this slot, and we weren’t joking. This is not one of those games that throws money at you in the bonus rounds, and the main bonus feature is a rather stingy 12 free spins awarded by landing three scatter roses, which perform a charming dance animation when you land them. Having said that, all prizes are tripled during the free spins and you can re-trigger the spins as much as you like, so there is definitely the potential of winning more. Landing the Spanish dancing girl on reels three and five also lets you pick up a nice little bonus, though it’s random, giving you the choice to pick between the two symbols and win as much as 80x your stake.

While the Spanish Eyes slot game won’t blow you away with any element of the game, it’s a good looking slot that pays relatively well and has a couple of interesting mechanics to keep you going. The Spanish theme is genuinely uncommon in slots, and this game captures it well, even though the graphics and animations are decent rather than spectacular. A good slot to keep you occupied, and your bank balance ticking along while you’re at it.