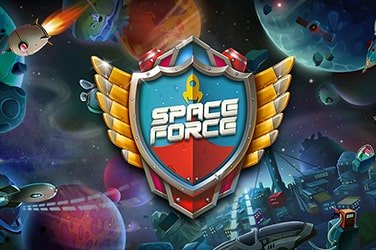 It’s always nice to see a slot provider explore the world beyond our own in outer space if only because there’s so much we still have yet to learn about it all – which should be as intriguing as it may be terrifying.

Today, we’re going to take a look at the Space Force slot game by Gamevy to see what it has to offer.

Unconventional is probably the most realistic first impression we get from the Space Force slot game with a 3×7 reel layout that is, well, quite something, to go alongside the 7 paylines.

The symbols are all related to the theming with astronauts, a traffic jam, an occupied planet, a pilot, a gun, a space soldier, an alien and more appearing on the board.

The return to player (RTP) percentage is always going to throw up a few surprises regardless of what your initial expectations may be because let’s face it, slot gaming is becoming more and more unpredictable by the day. The Space Force slot game isn’t immune from this kind of scrutiny with the reported RTP here coming in at 94% which, as most of us will know, is below the standard industry average. However, with low to medium volatility, players have the chance to potentially secure smaller yet more frequent wins.

You can put down just a few pennies to get started or if you’re feeling daring, you can work all the way up to a maximum stake of $/€/£70. From there, according to a few different sources, players can actually walk away with up to $/€/£250,000 in winnings.

We tend to think that the actual gameplay here is a little bit sloppy, and while there are elements of the theming littered throughout the board, it could’ve been done with a bit more attention to detail.

There’s no wild symbol to be found in this slot but the Space Force logo and the Planet Jackpot icons are both there as makeshift scatters that can trigger bonus features.

The Free Spins feature will be activated by landing three or more of the Space Force symbols in a row on the reels, and from there, you’ll receive a random number of free spins between 2 and 20 – which is an interesting take on quite a common feature.

The Bonus Game is introduced when landing three Planet Jackpot symbols in a row, giving you the chance to spin a wheel and determine which of the following five cash rewards you’ll receive: Gas Giant, Supernova, Red Dwarf, Comet or Asteroid.

The Space Force slot game has a few hidden gems within the potential winnings and some of the bonus features, but on the whole, it doesn’t do enough to fully take advantage of the theming – and the name which, as we now know, has been used for a TV show and within the world of politics. It’s good, but it’s not quite great.