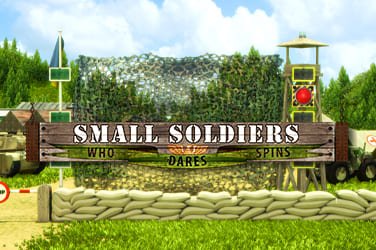 Before you get too excited, Small Soldiers is completely unrelated to the 1998 movie of the same name that pitted action figures against each other. In this slot, you’ll be dealing with the real thing, cute little warriors in a modern military base who nevertheless have access to all kinds of dangerous-looking firepower.

Excellent little mini-games and some top drawer prizes make this game a lot of fun to play, but are the rewards worth the sacrifice? Let’s find out in our Small Soldiers slot game review.

Small Soldiers is heavily military-themed as you might expect, with a tiny army base in the background flanked by tanks and trucks while tents and watchtowers sit behind the reels. The low-value symbols are the normal J – K icons paired with dog tags and grenades, while the higher paying symbols are tanks, planes, helicopters and a few officers of different roles such as medics and pilots. The whole thing could look rather grim except that the characters are so cute, looking like little video game avatars with big eyes. As you would expect, a jolly military tune on the fife and drum plays in the background, while sound effects of missiles, guns and an angry drill sergeant complete the scene. There are even little games to play within the game that use great 3D graphics, so you might forget you’re still playing a slot!

While the Small Soldiers slot game is fairly typical in that it uses three rows and five reels it also has a lot of pay lines, 40 in total, so there are loads of options to help you place your bet. The maximum bet is fairly low at £/€/$50 per spin, though you’re looking at an amazing top win of 6,000x your wager if you hit five of the top-paying Officer symbols, so don’t worry about getting your money’s worth. The Officer, Artillerist and Medic all play over 1000x your wager for five on a line so there are plenty of high paying chances, though the bonus rounds can be tricky to trigger so you’ll be relying on winning in the main game just as much to get the top prizes. That fact is reflected in the average RTP of 96%, which places this game somewhere near the middle of the pack when it comes to volatility.

There are three premium features in this game: The wild, the free spins and the artillery game. The wild we’ve already covered, except to say that all wins involving wilds are automatically doubled. Five pilot scatters will win you 12 free spins, with an even bigger benefit being the 4x multiplier that you get tacked onto the wins you make. Finally, the artillery game will put you through basic training, challenging you to shoot down three targets in each of the three rounds. Each target grants you a random cash prize, but try not to miss and wash out!

We love how varied Small Soldiers is, and to be fair to Saucify, they haven’t skimped on any area of this slot’s design. The graphics are great, the features are many and very different from each other, the payouts are good, and the betting options are broad. All slots players will want to report for duty in this army, whether you’re a high or low roller!

Casino77 is known for slots, and we have hundreds on offer, such as Big Bad Wolf, Retro Reels – Extreme Heat and Lucky Riches Hyperspins.