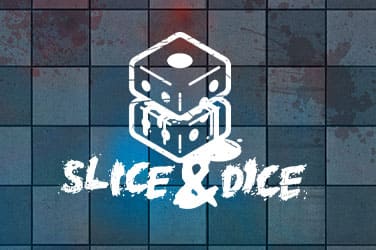 Thinking about giving this slot game a go, but want some key information first before starting? Then this Slice and Dice Slot Game Review is the perfect place to start. We will cover the general gameplay, the return to player (RTP) rate if there are any Slice and Dice Bonuses for you to take advantage of, and if with everything added up in the end, this is an enjoyable and engaging slot game to play.

Black Pudding games are not necessarily one of the bigger names in the online slot game industry, but even in their short time on the scene, they have produced a number of interesting and exciting titles. The Bun in the Oven Slot Game was one we’ve enjoyed playing recently, as it was not only fun to play, but also looked great as well. Clearly, a lot of time had gone into the design. We are therefore happy to report that the Slice and Dice Slot Game follows where Bun in the Oven left off. The graphics are really state of the art.

What we like about Black Pudding Games is that their games are rather different from the majority of the slots that we review. There isn’t the standard three by five grid on offer here- instead, you are presented with a human body, with nine different segments. Then, using a scalpel, you then cut open the body, hoping to land multiples of three of the same dice face. Obviously, the 6 is the most valuable, but landing any matching numbers will result in a payout. If you are able to match three symbols without using all nine of your incisions, then the payout will be higher.

So there aren’t the traditional symbols that you would usually see in the standard slot game, such as lucky 7’s, cherries or bar symbols. It is just the six sides of a dice that are on offer here, that have different colours to help differentiate from each other.

This would usually be the part of this Slice and Dice Slot Game Review where we would cover the bonus features. However, Black Pudding Games have not included any in this slot. Similar to their previous games, they believe that the standard game is not only fun enough without the bonuses, but also offers players ample opportunity to gain some top cash prizes, without the need for free spins or multipliers etc. We tend to agree and enjoyed this game and its simplicity.

The RTP rate for this slot game is 96%, which is the standard for most online slots.

Black Pudding has produced another quirky and intriguing title. There may not be any Slice and Dice Bonuses, but the base game gives players the chance to win some top prizes, and have fun in the process.