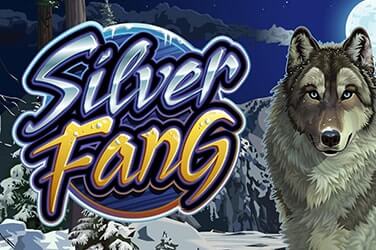 We love a good animal-themed slot, and we’ve had some good experiences with slots themed around the great outdoors too, so when Silver Fang came along it seemed like a match made in heaven! There’s more than a little bit of the mystical about this slot, which is set entirely at night and is quite spooky even though the only characters are the wolf and its prey.

But does Silver Fang have enough gold to keep you happy, or is it just a mangy old dog? Let’s take a look in our Silver Fang slot game review.

The Silver Fang slot game is a nice looking slot, using striking imagery to bring the white world of the wolf to life. Snowy plains, freezing rocks and rows of silent silver birch trees make up the background of this slot, all lit by the bright full moon in the sky. The symbols are similarly wilderness themed, and while the low-value symbols are the standard 9 – A given a silver paint job, the high-value symbols are all related to wolves and their lives in the wild: their prey the caribou, the wolves on the hunt and the wolves howling at the moon. These wolves feel a lot like the spirits and legends of Native American culture or the wolves of Jack London’s novel White Fang, and there’s a definite spiritual feel to this slot. There’s even a mystical soundtrack and a series of spooky animations when you make combos, bringing the game to life.

The layout of this slot isn’t much to shout about, having the standard five-reel and three-row layout, but the 50 pay lines are very interesting and hint at a large number of wins coming your way. If we’re honest this part of the game isn’t the most exciting, and while you’ll win fairly frequently there aren’t a huge number of big wins to be found in the main game, partly as a result of the low betting limit that tops out at £/€/$25. The wolf symbol is worth as much as 500x your bet for five, but more commonly you’ll find yourself landing lower value combinations of between 10 and 20 times your bet. Despite that this game has an RTP of 96%, meaning that there must be some more wins to be had in the bonuses, so let’s take a look.

There are two special symbols in this game, the howling wolf wild and the paw print scatter, both of which offer some pretty handsome rewards. In the main game, the wild performs the usual duty of substituting for other symbols, while in the free spins round it can appear stacked to take over whole reels and provide even greater wins. Of even more interest to players is the scatter, which grants 15 free spins when you land three and as much as 50x your stake if you land five of them. All wins in the free spins round get an amazing 5x multiplier tacked on, meaning that there is a potential jackpot of 5000x your stake on the cards here.

Silver Fang does a lot with not very much, turning a stark and white theme into something that is both haunting and spiritual thanks to great use of sound effects and music. While the main game is nothing special in terms of prizes, the addition of the bonus round changes everything, and thanks to its amazing 5x multiplier you can generate excellent wins.