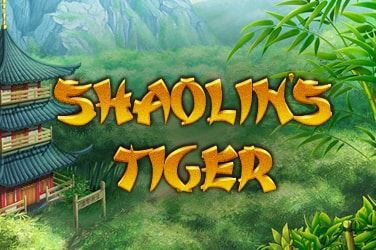 There’s been a recent explosion in the number of games themed around Asia, and China in particular, so you’re spoiled for choice these days in that category. That’s why it’s gratifying that Shaolin’s Tiger slot game offers something a little bit different, mixing up the theme with some seriously focused looking cartoon monks amid the more traditional golden lions and red pagodas.

With some serious cash on the table too, Shaolin’s Tiger could be worth a look for even the most jaded of slots players. So does this game bang the gong, or will you be left with empty hands? Let’s take a look in our Shaolin’s Tiger review.

Tom Horn, the game’s developers, are well known for turning out a series of solid, well-made slots games. While they may not be able to stand up against the big-budget blockbuster titles, you’re always going to have fun, and so it is with Shaolin’s Tiger. The visuals are high quality, with a haunting moonlit scene in rural China forming the background to the Shaolin monastery in which the game is set, which changes to day as you play. While the lower symbols are disappointingly rendered as the generic 10 – A, at least these are formed from bamboo leaves to add to the flavour.

The higher value symbols are represented by a shuriken, a set of nunchaku and a zen master, which are much more interesting visually, as well as financially. A set of 5 zen master symbols on the 3 row, 5 reel playing area will net you an incredible 1,000x your stake. The maximum and minimum bets are pretty low, £/€/$9 and £/€/$0.02 respectively, so it may take you a while to earn the big bucks, but with an RTP of 96.44% you won’t be short-changed either.

The bonus rounds in Shaolin’s Tiger are made up of one simple set of 10 free spins, which you can trigger by landing three kung fu fighter wilds on your reels. This feature can be retriggered as many times as you like, so if you keep landing three fighters you can keep spinning. The fighters you land also become wild for the duration of your spins, which help you to complete combinations and award you cash prizes that are multiples of your initial bet.

On top of this, you can also expect to find the golden lion wild on your reels during the game. These guys are stackable, so you can create larger wilds that take up a whole reel by landing them on top of each other, and multiple wilds on your reels generate higher multipliers. Landing five golden lions on your reels means a jackpot of 5,000x your stake, so these are the symbols to aim for.

Shaolin’s Tiger is a well made, easy-going slot that is perfect for beginners looking for an interesting and exciting experience that’s not full of baffling mini-games. That doesn’t mean it’s for low rollers, though, because a potential jackpot of £/€/$45,000 is surely enough to have any player giving this Chinese themed title a shot.