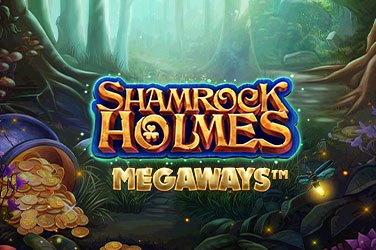 We like to run an unofficial pun of the year in our slot reviews, and we think we might have a contender right out of the gate! Shamrock Holmes had us smiling before we even started to play, and the cute little leprechaun detective has plenty more charming fun where that came from in-store, not to mention some amazing wins in this Megaways slot.

It’s one of the first Microgaming efforts to feature this system, so we were excited to find out how it goes! Will Shamrock Holmes solve the puzzle, or is this game a dead end? Let’s find out in our Shamrock Holmes review!

As the name implies, Shamrock Holmes is a leprechaun who dresses as the famous detective Sherlock Holmes, deerstalker cap and all, and lives in an enchanted forest. He may also solve fairy crimes, the game doesn’t say. Despite the fun title, the theme doesn’t really explore this idea very much, and aside from the leprechaun’s cute little outfit the rest of the theme is your standard leprechaun slot fare. The enchanted forest behind the reels looks great, full of dappled sunlight and magical looking fireflies and pots of gold, while the symbols are fairies, gold coins, flowers and our little leprechaun friend himself. The low-value symbols are the standard 9 – A, but the animations are so fun as symbols disappear in puffs of smoke, and the jaunty Celtic music in the background is so catchy that we’ll let them off the hook.

We’ve already said that this is a megaways slot, so you might already know that this means lots and lots of wins, but for those of you who haven’t played a slot like this before we’ll explain. Megaways slots have variable numbers of symbols in them rather than set rows and reels, and there can be anything from two to seven rows at any one time so that you can expect a maximum of 117,649 ways to win when all of the symbols are active. The betting limits are low, at £/€/$20 per spin, while the prizes are pretty low too at 50x your bet for five of the most valuable symbols. However, it’s not uncommon to land wins with 49x multipliers and generate cash on every spin, which explains why the RTP can sit so high at 96.44% despite all that.

We love a good megaways slot because it throws a whole new load of risk and uncertainty into the game, but a megaways slot that looks good and plays well is guaranteed to be a favourite of ours. You can say all those things and more about the Shamrock Holmes slot game, and while it’s a shame they didn’t make more of the hilarious theme, you won’t mind when you’ve got a pocket full of gold!