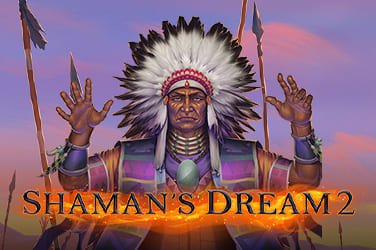 Shaman’s Dream 2 is a sequel to Aussie studio Eyecon’s original Native American themed slot, which had some unique design and visuals but was held back by generic mechanics and dated graphics. Thankfully, the developers decided that the first game was worth a second bite of the cherry, and have released this new and improved version with some extra features and updated visuals.

So is this slot a Shaman’s dream or a Shaman’s nightmare? Let’s take a look in our Shaman’s Dream 2 slot game review.

Fans of the original will recognise the dreamy, ethereal imagery that’s been brought forward into the sequel, but thankfully with much better execution. The background to the reels is a collection of Native American teepees on a windswept plain, and this does a great job at setting the scene for a romantic adventure on the prairies. The reels themselves are bordered by a rustic wooden frame, while the unique symbols take in a range of Native American cultural icons like totem poles, ceremonial knives, eagles, teepees and tribal warriors. The graphics are also much improved, and while the images are largely the same as they were in the first one, the drawings are much better and are in much higher definition. The animations are also back, one of the highlights of the original, as successful combos make wolves howl at the moon, bears swipe at salmon and spooky winds rustle the dream catchers.

Gameplay-wise Eyecon haven’t taken too many risks, kicking off with five reels and three rows to play with. The payouts are pretty good, and while the highest paying symbol is the wolf wild, it still manages to pay 380x if you land five across the reels. The game is more for the low rollers among us with a maximum bet of £/$/€12.50, but thanks to the pretty decent RTP of 95.57%, there’s plenty of money to be made. However, the major attraction of this game is the bonus round, where a whole raft of free spins could soon be making you rich.

This game manages to pack a couple of bonuses on top of the regular payouts, the first being the golden symbols which land regularly on the reels. Land two on one spin and watch the Shaman summon a spirit animal, which generates an instant win of up to 20x your stake. Alongside this, three or more dream catcher scatters can grant you up to 25 free spins with a multiplier of up to 12x if you land five scatters while landing a wild with your initial scatters will grant you 6x. These features can all be retriggered, allowing you to win a whopping maximum of 28,500x your stake!

The Shaman’s Dream 2 slot game takes the interesting concept from the first game and improves on just about every aspect, sharpening up the graphics and adding a load of other features that can seriously boost your winnings. Excellent art and design both help to bring the theme to life, and a massive potential jackpot gives you a great reason to play!