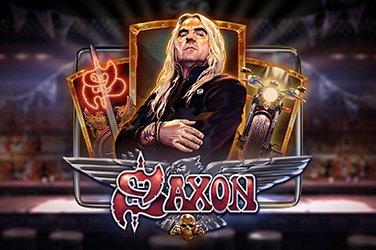 Rockers of a certain vintage might want to fasten their seatbelts because we’ve got another metal band tie in coming in hot. This time it’s the turn of Saxon, a British outfit at the forefront of the heavy metal craze in the 1970s alongside Iron Maiden and Black Sabbath, and now they are immortalized further in their very own slot game.

It’s got all the bombastic imagery you’d expect, and plenty of the band’s signature music, but is there more to this slot than just the name? Let’s take a look at our Saxon slot game review.

Saxon features the band’s signature combination of biker culture and medieval weaponry in equal measure, so the setting of a chrome-plated bar stacked to the roof with booze won’t surprise you in the slightest. Racing bunting adorns the background of the reels while motorcycles hang from the shadowy ceiling, and on the reels themselves, you’ve got card suits to represent the low-value symbols while the high-value symbols are represented by a combination of biking gear and suits of armour, as well as the band’s frontman Biff. It almost goes without saying that the soundtrack is provided by a medley of the band’s hits, while high-quality graphics and slick animations bring the game to life with roaring exhausts that shoot fire and lightning that strikes the screen.

Despite all the heavy metal imagery the mechanics behind the game are actually pretty sedate, with Saxon utilising a five-reel, three-row setup with ten pay lines to play on. There’s some reasonable money to be made in this slot thanks to the high betting limit of £/€/$100, and while the highest value normal symbol represented by the leather jacket will pay 30x your bet, the claymore wild will add 50x your bet to the kitty if you manage to land five. The wilds in this slot are especially good because they always appear stacked, taking up the whole reel, so it’s much easier to fill your screen with wilds because you only really need five of them. Stacked symbols are definitely your friend in the Saxon slot game, because all symbols can appear randomly stacked, and also add a 1x multiplier to any win they feature in. This increases to 2x when the symbol in question is a wild, so any win with five wilds is automatically doubled to 100x your wager, which explains where the high RTP of 96.24% comes from!

Saxon spreads out its goodies quite nicely so they’re not all in the bonus round, though that does mean there’s only one official bonus, a free spins round. Accessing this round is strangely logical, and requires you to land a motorcycle scatter and a Biff scatter in the same spin. Biff will then get on his motorcycle and roar off into the distance, and you’ll get a random number of spins up to 15. If the win you got to activate the game carried a multiplier then you’ll get to keep that in the free spins game, while you can activate it again in the bonus by landing two more scatters.

It almost goes without saying that the Saxon slot game will appeal to fans of the band or metal music in general, but we think that the combination of cool visuals, fun bonuses and great prizes will win this game fans beyond the genre too. You’ll certainly be rocking out to the multipliers on offer, even if you’re more of an easy listening fan!