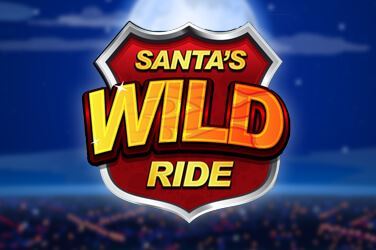 Saint Nicholas may be the patron saint of children and the jolly fat man who dispenses presents on Christmas Eve, but we regret that the portly fellow has rather been done to death by slots in recent years.

Dozens of generic games are churned out every year to cash in on Christmas, which makes us suspicious of any Santa themed games, but we had to give Santa’s Wild Ride a go because it doesn’t quite look the same as the others: A beer-swilling badass biker Santa with mechanic elves and a trike for a sleigh? You have our attention! Here’s our Santa’s Wild Ride slot game review.

This isn’t your everyday Santa Claus, and Santa’s Wild Ride wears its theme on its sleeve. The background to this slot is normal enough, featuring a snowy North Pole scene under a moonlit sky and fairy lights around the reels, but the symbols are anything but generic! This Santa likes to indulge, and alongside the Christmas pudding, mince pies, Christmas cookies and club sandwich is a massive stein of beer, though we trust Santa waited until after his wild ride to drink it! These are the low-value symbols, while the high-value symbols include Santa’s bike, his elven mechanics, his keys and his post box stuffed with letters to Santa. The graphics are excellent and the theme is so well done that you can’t help but be pulled along for the ride!

This isn’t the Santa you’re familiar with, then, but the game mechanics behind this slot are a bit less unconventional. While it uses a 243 ways to win mechanic there are still three rows and five reels as in most slots, while the maximum bet is a fairly paltry £/€/$7.50 per spin. Gamers shouldn’t lose heart, though, because this is just further confirmation of how many wins you’ll be getting along the way, with payouts in the main gaming topping out at 800x your stake when you land five of the Santa’s Wild Ride wilds. This results in a high RTP of 96.47%, reflecting the frequency of your wins.

All Santa needs to get going on his Christmas adventure is the set of keys to his bike, whose name is Blitzin’ by the way, and if you can find them for him on the reels you’ll be handsomely rewarded! The bonuses in the Santa’s Wild Ride slot game are all about those tasty wilds, and you can get at them simply by landing three of those bike key scatters, which will automatically grant you 25 free spins. Once you have activated these spins you’ll be given the choice of which kind of wilds you want to play with, which includes wilds that stack in clusters, wilds that take over whole reels and wilds that get bigger with each spin. There’s no right answer regarding which option to pick, so choose wisely and hope to get rich!

Santa’s Wild Ride blows most of the other Christmas themed slots out of the water with its colourful visuals and originality, while the prizes you can win aren’t half bad either. A low betting limit and some fairly modest wins are typical of the main game, but thanks to the amazing wilds feature and the 243 ways to win, you’ll always find yourself coming up trumps in this game!