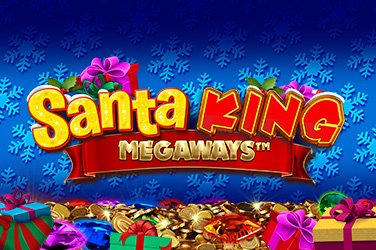 Developer Inspired Gaming brings you all the festive fun with this Christmas version of Reel King Megaways. The Santa King Megaways Slot Game is an exciting, cascading video slot, featuring a whopping 117,649 ways to win across six reels.

Enjoy playing Reel King Megaways but are looking for something to get you into the Christmas spirit? You’ll have a great time playing Santa King Megaways since they’re almost identical, except for a couple of cosmetic changes, an RTP drop to 95.56% and a new seasonal soundtrack.

The Santa King Megaways Slot Game is optimised for all devices and features wintry wallpaper as well as Santa hats and snow to convey the Christmassy theme. The soundtrack includes some favourite festive hits that everyone will enjoy.

Symbols-wise, you’re looking out for the same recognisable symbols enjoyed during Reel King Megaways gameplay, but with some added snow. You’ll find plums, watermelons, and cherries, as well as 9-A royals, and sacks full of coins.

The slot itself features Cascading Wins, Lit Reels, Gamble Features, and Free Spins with progressive multipliers. The layout consists of a six-reel grid, with room for two to seven symbols in each. The number of rows in play isn’t determined until you spin, nor are the number of paylines, which can vary from 64 to 117,649. A further row measuring 4×1 sits above the main reel set.

On any winning spin within the game, the Cascading Wins feature activates and removes all winning symbols from the grid to allow new ones to sweep down and fall into empty slots. This results in chains of consecutive wins, with new symbols continuing to sweep down until no further winning combinations are possible.

Lit Reels occur during the base game, when on any spin up to six reels can light up yellow, with a further opportunity for yellow Lit Reels as a result of each cascade. Once you achieve six Lit Reels, you’ll be propelled into the Reel King feature, with the next two cascades after that activating the Super King and Mega King features in turn.

These features result in a mini 3×1 slot layout, with the Free Spins Trail appearing above the reel set. You can reach up to 6 Reel Kings and 25 Free Spins, with the chance to win cash prizes worth up to ten times your bet.

The Reel King will disappear if you land a non-winning combination without Lit Reels, and you can then proceed to the Gamble feature. This gives you the chance to win up to 25 more spins, though losing a gamble will result in returning to the base game.

Once the Free Spins round activates, so does the progressive multiplier, which increases with each cascade without any limitations.

Though the Santa King Megaways Slot game is identical to its big brother slot in almost every way, the Christmas theming is enjoyable, and it’s worth a spin over the holiday season. Fans of the original Reel King Megaways may be disappointed to find that the payback percentage has been cut back slightly, but it’s still worth checking out for some festive fun.