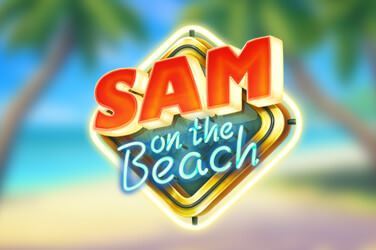 The Sam on the Beach slot game was brought to us by the creative people at ELK Studios back in February 2017. It is a cartoon slot with a fantasy theme and has plenty of features to make for a compelling gameplay.

Aesthetically this is one of the best slots around as it mixes wonderful animation with appealing graphics and an enjoyable soundtrack which is able to be played on all desktop, mobile and tablet devices.

The Sam on the Beach slot is based around Electric Sam who takes his family on holiday to the Caribbean. Allow yourself to be whisked away to the idyllic surroundings of the Caribbean islands with this entertaining game. The slot has five reels and as many as 243 paylines so brings with it a medium-high variance.

Placed in a picturesque landscape, the reels are covered with icons of differing values. The lower value symbols include neon sea stars, seahorses and crabs. The higher paying icons are Sam and members of his family, Sandra who is his wife, his brother Ted and his daughter Maggie. There is a Wild icon which is the Sam on the Beach logo and as ever it replaces all of the icons apart from the Scatter. That is the bell-shaped symbol.

As with a lot of modern video slots, there are some good bonus features on offer with the Sam on the Beach slot game. The first of them is the Beach Memories Respin Feature. To activate this you need all four members of the family to appear on the same row. When that happens you be given a free respin where the family members are replaced with Sticky Wilds. This can stack up to three times.

The main feature in the Sam on the Beach game is the Free Spins Bonus one which is activated when you get three, four or five of Uncle Ted’s treasure ship bell icons in a combination. You will be given five, 10 or 15 free spins depending on how many icons you have.

There are also things called Electric Treats, which give every family member their own feature, triggered when they land during the Free Spins feature:

The Sam on the Beach slot game comes with an RTP rating of 96.3% which is slightly above the average for a video slot and on the side of the player.

There are lots of entertaining slots out there with a number of different themes but Sam on the Beach is right up there with the best of them. The graphics and backdrop to the machine, along with the storyline, are wonderful. The features and the potential to win big from them is another thing that makes this slot stand out. If you are looking for a slot game of medium to high variance, which is extremely enjoyable, make sure you have Sam on the Beach on your list.