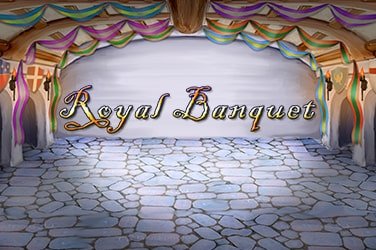 We hope you’re hungry because this slot is a feast for the eyes! The eating habits of Medieval royals are the stuff of legend, and it’s time for you to get in on the action and attend a Royal Banquet. There are all sorts of colourful characters on display here, who all share a love of food and would love to help you get a share of the riches too.

So will you be at the head of the table, or will you get a bad case of indigestion? Let’s take a look in our Royal Banquet review!

While the graphics in this slot look a little dated, we can fault Genii’s attention to detail when they created this game. You’ll be transported straight to the Royal pavilion when you play, with streamers and bunting festooning the background and plenty of delicious treats and colourful characters on the reels. All the symbols are unique, with the low-value icons represented by the food itself, including foaming flasks of ale and hunks of bread and cheese, while the human faces of the court represent the higher value symbols. Expect to see the King and Queen, a Princess, a Knight, a Monk and a Jester around the table, all with enormous appetites to fill.

Under the hood, there’s better news. For a start, you only need two of the high-value symbols in a row to earn a win, while you still need three low-value ones to create a combo. Second is the amount you stand to win by making these combos: Even the lower value symbols can win you up to 750x your stake for five in a row, while the high-value Princess pays 5,000x your stake. And that’s just in the base game! With bets slightly on the low side, falling between £/€/$0.01 and £/€/$50, that’s still an awful lot of money to win on one spin! While Genii haven’t released the RTP of this game, you can be assured that the money is pretty good.

There are actually two bonus rounds in this game, activated by landing three or more of either scatter across the reels. The first scatter is the Jester, which when landed three or more times grants you between 10 and 30 free spins. This is a fairly standard free spins feature, though you can reactivate it during the spins by landing more scatters. The humorous chicken symbol also activates a bonus round of a kind, but with a difference. This game gives you the opportunity to taste the King’s food, though why you’d want to poison such a generous king is anyone’s guess, making you choose one of five ingredients to taste and awarding you a random cash prize.

The bonus rounds save the Royal Banquet slot game from being a fairly generic medieval romp and the game’s sense of humour that it wears on its sleeve. The graphics are a little ugly, but it’s hard to avoid the odd chuckle as you play at the absurdity of the characters. We also can’t deny that the prizes are great!

We have a banquet of slots you can choose from, including Epic Gems, Diamond Deal, Boss the Lotto and Sunset Delight.