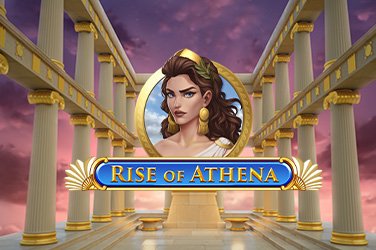 The golden temples of ancient Greece are a popular destination for slot games, and one of the most popular gods from that particular culture is Athena – the goddess of wisdom and patron of Athens, and the hero of Rise of Athena.

She might not have Jupiter’s thunderbolts or Hades’ demons, but her magical owl is a symbol of good fortune and luck that it’s impossible for players to ignore. The riches of Mount Olympus are legendary, but will you escape with a share of the treasure or will you be a victim of the Gods’ cruel games? Let’s take a look in our Rise of Athena review.

Unlike some of the cluttered and messy slots that we sometimes see with an ancient Greek theme, the Rise of Athena slot game utilizes plenty of clean lines and light colours to make you feel like you’ve really journeyed into the clouds to meet the gods. A shining golden temple forms the background to the reels, and there are none of the ruins that you might be used to because it all looks clean and brand new. Athena and her owl sit in the centre of the temple in statue form, and they both appear on the reels too: helmets, a scroll, a smoking jar, the owl, Pegasus and Athena all make up the high-value symbols, while unfortunately, the low-value symbols are the standard 9 – A.

The setup on the reels themselves is fairly simple, with a standard five reel and three-row layout, and really the only standout feature is the betting limit of £/€/$100 which makes this game attractive to high rollers and beginners alike. However, on top of this, there are three types of the same wild that offer both the ability to complete combos and a 1x to 3x multiplier depending on whether it’s gold, silver or bronze. Athena is the best paying symbol in this slot, coming in at 150x times your stake, and she’ll even payout 1x your stake if you land just two of her. The RTP of this slot comes in a little low at 94.2%, so you’ll need to do well on the bonuses to make the big bucks, which is why it’s good that this game really packs them in!

The first bonus is the standard free spins option, which you can activate by landing up to five owl scatters, giving you 12 free spins. When more owls land on the screen during these free spins you can continue to win money using them, and you can make combos with them no matter where they land on the screen, winning up to 500x your stake. The multiplier wilds also change slightly in this round, and each multiplier that lands stays on the reels remains in place, ticking down from 3x to 2x to 1x with each spin until it falls off the reels entirely.

Rise of Athena isn’t packed with original features, but all of the features it does bring to the table fit nicely together and equal a fun and exciting package. It looks great and the symbols are all well designed, while the addition of the extra bonus rounds more than makes up for the lack of high payouts in the main game.