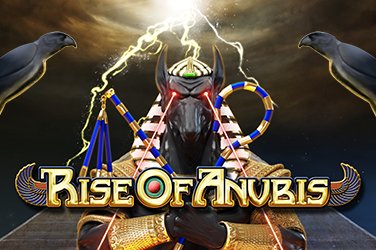 Inspired Gaming’s Rise of Anubis is an Egyptian-themed slot with a bumper 6250x jackpot and a tonne of free spins and super wilds.

But how does it shape up behind the scenes? Let’s take a look.

Originality isn’t the slot’s strong point and we will go into a little bit more detail on that later in the review, but as far as the playboard is concerned it’s a fairly standard 5×3 setup with playing card symbols such as ‘Js’ Qs’ and ‘Ks’ as well as your fairly bog standard Egyptian symbols. Got something in mind? You’re probably right.

Players who are looking to take things slow with a small playing budget can wager as little as $€£0.20 per spin, while the high rollers will be salivating at the prospect of a $€£250 max bet per round, which is among the highest playing stakes on the market.

We stress to players that they should be looking for slot games with a Returns To Player rate (RTP) of at least 95% and Rise of Anubis is bang on the money. This couples nicely with a medium volatility, which means that small wins should be fairly commonplace, but please don’t hold me to that, as bad sessions DO happen!

Players have 20 paylines to keep track of and bagging a win on one of them is relatively straightforward, with punters just needing to line up at least three adjacent matching symbols. The highest-paying symbols are, of course, the game’s Egyptian-themed monuments, such as pyramids that offer multipliers of up to 250x your stake, and the eye of Horus that pays the most lucrative regulation bonus of 500x.

The ancient Egyptian theme is something that we’ve seen time and time again, but it’s no secret that it’s a highly successful slot theme among players, which is why new versions continue to be released. That said, there isn’t anything particularly unique about Rise of Anubis from a visual perspective, with the playboard, symbols and animations all a bit samey and lacking in creative inspiration.

Keep an observant eye out for the Anubis symbol, because matching at least three in a spin triggers the game’s free spin bonus round. There is an incremental multiplier for the bonus round, depending on how many Anubis symbols you collect in the build-up, and if you’re on a particularly hot streak you could be looking at a 50x multiplier if you land five Anubises in one spin.

Rise of Anubis isn’t a slot that will set the world alight thanks to some pretty underwhelming visuals and a concept that has been done to death. However, the game itself plays nicely and I enjoyed the simplicity of the animations, while the bonus rounds offer ample excitement to make this a slot that you should try at least once. And besides, a 6250x multiplier is worth the admission fee alone!