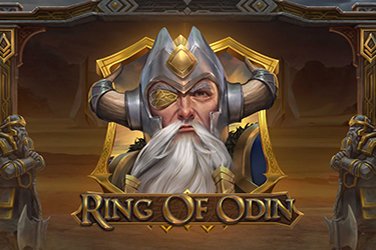 We’ve seen a good few big-budget Norse themed games hit the Internet over recent years, and it seems like every developer has to have their go at taking a slice of that pie. The Ring of Odin slot game is Play N Go’s latest attempt, focusing on the king of the Norse pantheon Odin, the ‘all-father’.

You can tell from the outset that this game has high production values, but does it have the playability and the cash to back up that first impression? Let’s take a look in our Ring of Odin slot game review.

Norse mythology was almost made for slot designers to work with thanks to the variety of iconic characters, artefacts and concepts it brings to the table. Play N Go have made great use of the subject matter here, creating a slot that feels like a movie or a video game in terms of how epic each spin is made to look. Thumping, driving orchestral music forms the score to this slot, and some great sound effects really give the impression of weight and consequence to the play as it happens: Symbols slam into place, crows caw in the background and Odin’s ring spins and crashes down on the reels.

The visuals look great too, with coloured runestones making up the low-value symbols while characters and objects from Norse myth make up the high-value ones: Odin’s ravens, his eight-legged horse, the creepy wolves that stalk the underworld. These symbols are all extremely high quality and well designed, and just about everything is animated, spinning and sliding around the reels as different game modes are activated. It looks like a movie!

For all that excitement, the game itself is relatively simple. It’s played on a five-reel by three-row grid and features 10 paylines. The most valuable symbol, Odin’s spear, is worth 30x your stake when you collect five on the reels, and the betting limits are pretty generous at between £/€/$0.10 and £/€/$100 per spin. This all adds up to an above-average RTP of 96.2%

The slot is called Odin’s Ring, so we can’t fail to mention how it works! The ring randomly appears in the middle of the middle reel during the main game, and any symbols that happen to land inside it become chosen. This is followed by a re-spin using a grid of Odin rings, that you can see burned into the background of the reels all the time, and the number of that chosen symbol that land within that grid of rings decides how many free spins you get, up to a possible nine. During these spins, the chosen symbol that activated them is frozen in the middle three reels, helping you generate wins.

Another way of triggering free spins is to land an Eye of Odin scatter in Odin’s ring, which triggers four free spins and the ring grid again, this time allowing you to add between 1x and 9x multipliers to your game by landing more scatters in the rings.

While it’s easy to see that this slot looks and sounds great, with graphics and sound design that wouldn’t look out of place in a video game, it’s also a nicely balanced and highly rewarding game too. It’s not bonus-heavy – you can win lots of cash in the main game, but its bonuses are both frequent and rewarding enough to be fun. This is a really good addition to a crowded genre, and well worth a play.