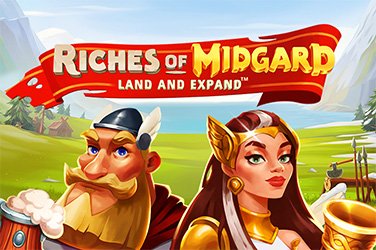 NetEnt’s Riches of Midgard slot game is a nod to a mythical fantasy kingdom, and while that concept is ten-a-penny in the slot world, we see a more stripped back version here that tailors to the no-frill market.

Let’s take a look at what makes the game tick along with the numbers that matter in our Riches of Midgard review.

Riches of Midgard plays out on a 3×3 playboard filled with your traditional playing card values alongside a sprinkling of medieval characters and figures, as well as a rather bizarre (albeit very welcome) appearance from a joint of ham! Yum!

On the volatility scale, we’re on the relatively low end with Riches of Midgard, which means players can expect a steady stream of small wins, but a jackpot of a 435x multiplier is also on offer for the most highly sought after combinations.

The Returns to Player rate on Riches of Midgard comes in at a respectable 96% and coupled with its modest variance, players can enjoy a steady conveyor belt of wins. Bagging a prize on the slot is relatively straightforward, with players needing to match up a minimum of two symbols on one of the 29 available paylines.

Visually speaking, you’re likely to be in one of two camps. You’ll either enjoy the simplicity and minimalism of the layout, while others may well argue that it’s an idea that hasn’t been taken to its absolute maximum. While it is true that the volume could be turned up a notch on the graphics and animations, it doesn’t really take anything away from the spin-to-spin experience and the game remains immersive despite its visual limitations. In regards to the game’s audio it’s a fairly generic medieval-themed soundtrack, although the sound that plays on the click of each spin is reminiscent of something from the trojan horse story in Greek mythology and adds an extra sprinkling of authenticity to proceedings.

Bonuses can be picked up along the way by matching three Scatter sledgehammers that offer a varying volume of free spins, with the potential to top yourself up with even more free spins and the addition of extra rows on your playboard to further maximise your returns.

There’s also the possibility of buying a feature at a premium rate, so for players out there who don’t enjoy the long-term grind as much as others, there’s a simple shortcut to a world of multiplying possibilities.

Riches of Midgard is a slot game that isn’t going to set the world alight when it comes to a stunning visual concept, but it is a nicely crafted game that offers low volatility and consistent payouts, which will tick plenty of boxes for a huge percentage of the slot market. The ability to purchase a feature with your balance offers some form of uniqueness, while the game itself is easy to follow and has its fair share of engaging features to keep players spinning.