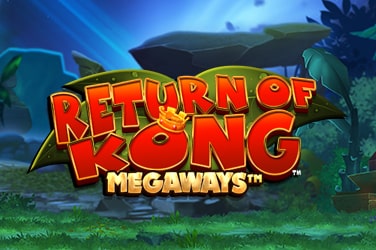 With free spins and mystery symbols just some of the Return of Kong Megaways Bonuses on offer, this slot is an awesome title that needs to be played by Casino77 members as soon as possible!

Blueprint Gaming has ensured players who take on their Return of Kong Megaways Slot Game will love the visuals that they have been provided as they have created them with an element of fun by making sure they are designed by using 3D drawings.

The game’s background features a green area as it would seem that players are deep in the jungle where Kong lives, whilst they will also be able to see the titular character appear to the right of the playing grid wearing a gold chain and crown as they show him to be the king of the jungle.

The playing grid follows a traditional Megaways layout, as this Return of Kong Megaways Review found that there are 6 reels and the potential of between 2 and 7 rows appearing on each reel. This means that the commonly found 117,649 different winning paylines are also available when landing sequences. A small bet of just $/€/£0.10 is needed to play this game, although a maximum bet of $/€/£100 is also possible on each spin placed.

When taking a look at the game’s paytable for this Return of Kong Megaways Review, it was clear that the symbols had been designed in the same way as the background of the game; with each of them being rather fun and enjoyable.

The game does feature a number of low-value icons that consist of the standard playing royal card values, although these are then followed by parrots, tigers, rhinos and Kong, who is the game’s most rewarding icon. There is a wild that can appear in the top four positions of the playing grid that has the ability to substitute for all regular icons.

The first of the Return of Kong Megaways Bonuses likely to be experienced by players at Casino77 is going to be the cascading mechanic that Megaways slots traditionally use. This is where winning icons will simply disappear from the grid and be replaced with new ones in the hope that more wins can be won. This is where the potential 117,649 different win ways come into play.

From time to time, players may notice that Kong will throw golden barrels at the reels. This is one of the Return of Kong Megaways Bonuses as when he does this, ‘The Mystery Kong’ feature or the mystery symbols feature can be randomly activated. All barrels that are in view will then reveal identical icons that can help to form some potential big payouts.

It is important for players to look out for the game’s scatter icon, as landing four of these will trigger one of the main Return of Kong Megaways Bonuses: a free spins game. Players who spell out the word ‘KONG’ with the scatter icons will receive 12 free spins, whilst a further scatter will show as a +5 symbol. Each win in this bonus feature will see a win multiplier increase!

Lastly, the main Return of Kong Megaways bonus is the ‘Monkey Trophy Collection’ feature. Any golden monkey trophy that appears on the horizontal reel will be added to the meter to the left of the reels and when 3 of these have been collected, players will receive two free spins whilst the minimum number of Megaways is increased, as well.

After looking at each of the aspects available during this Return of Kong Megaways Review, the return to player (RTP) rate for this Blueprint Gaming title was found to be 96.03% and comes with a medium to high volatility level.

Return of Kong Megaways slot is a top-tier title from Blueprint Gaming that features some of the best gameplay experiences as it incorporates a number of excellent Bonuses that can truly make this game rather rewarding when played! Enjoy free spins, mystery symbols and win multipliers as these will enhance the overall gameplay experience and take it to another level!