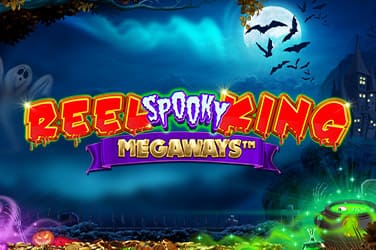 A range of different Reel Spooky King Megaways Bonuses is available to trigger in this slot, with each of them potentially making things rather rewarding for bettors!

Check out this Reel Spooky King Megaways Review now and find out just how they can.

Produced and created by Inspired Gaming, Casino77 players will be given a theme that combines a fun element with one that offers a touch of the spooky side, although that is to be expected given the title of this slot.

When doing this Reel Spooky King Megaways Review, it became apparent that the developer has looked to use some cool drawings to keep things fun, whilst the background provides the Halloween aspect in all its glory as there is a night sky with a full moon shining down rather brightly on the setting provided.

As with many of the other titles to feature the Megaways mechanic, this slot features a playing grid that consists of 6 reels and the potential for between 2 and 7 symbols to appear on each reel. There are also a familar 117,649 different ways to win, thus maximising the win potential on offer!

The paytable of this game features a number of exceptionally drawn symbols, with the developer certainly making things as light-hearted and fun as they possibly can with their designs.

Cherries, plums and watermelons make up the low-paying icons of this slot title, whilst these are then followed by the traditional playing card royals all appear as standard but have been given a fun twist. The cauldron that is available to land, though, is the most rewarding of the regular paying icons.

In addition, the top row will feature the witch hat symbol and this is the game’s wild icon, which will have the power to perform a trick and substitute for all regular icons where possible to help complete winning sequences.

There are a host of different Reel Spooky King Megaways Bonuses available to trigger in this Slot Game as Inspired Gaming has ensured it comes fully loaded.

The first that many Casino77 bettors will experience is the ‘Cascades’ mechanic, which comes as standard within a Megaways slot. This will work on any winning spin that is achieved and it will see those icons that formed the payout to disappear and be replaced with new icons in an effort to keep the wins coming!

Another of the Reel Spooky King Megaways Bonuses available is the ‘Lit Reels’ feature and this will see between 0-6 reels be lit up in yellow. One additional reel will be lit in yellow if a win is triggered, with those who manage to successfully get all six reels to light up being rewarded with the ‘Reel King’ feature. Those that go one better and manage to get another cascade past this point will activate the ‘Spooky King’ feature.

Those that trigger the ‘Reel King’, ‘Super King’, or the ‘Spooky King’ feature will see either 1-2, 2-3 or 3-6 mini-slots appear over the reels. Each mini slot will have a single payline and either pumpkin symbols or blanks will appear. Lit reels are also available here and if all three are lit up, then the ‘Free Spins Trail’ will be activated. If a mini slot has a losing spin or there are less than 3 of them lit, the feature will disappear.

If players have achieved a free spins position, then they will trigger the ‘Reel Spooky King Free Spins’ Bonus, which will then see them be given the option to choose to gamble what they have won on a wheel that is divided into red and green pieces. Those that land on a green segment will receive up to 25 more free spins, whilst landing on a red piece will see the free spins be reduced, potentially all the way to zero.

A major Reel Spooky King Megaways Bonus available is the ‘Reel Spooky King Free Spins’ game that will see the free spins come with an unlimited win multiplier that will increase by 1x each time a win cascade has been achieved. Each reel will also be lit red with each cascade until the sixth reel is reached, which will then see the number of free spins increase by 1, 2, or 3, as can the win multiplier.

The last of the Reel Spooky King Megaways Bonuses available is the ‘Spin Chance’ feature, which will be automatically triggered when a player’s balance falls below the current spin cost but is higher than being zero.

A return to player (RTP) rate of 95.56% has been provided to this Reel Spooky King Megaways title, whilst a medium volatility rate has also been made available.

With a number of free spins Bonuses available to trigger in this slot, Casino77 members should be looking to play this title as soon as they are finished reading this Reel Spooky King Megaways Review and look to try and enjoy a potentially rewarding experience!