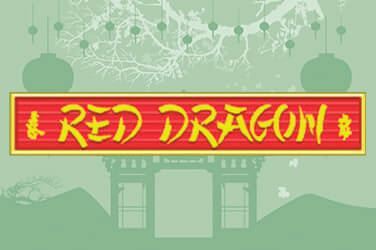 The Red Dragon slot game is brought to us from the creative team at 1X2 Gaming. It was introduced to the market in 2016 so it is a fairly recent release, which is evident once you load the game.

The graphics are simple and the interface is very easy to navigate with the Chinese theme very much evident on the machine. The slot can be played across all desktop, mobile and tablet devices.

Red Dragon is one of the many offerings on the market with a Chinese theme to it, as the name would suggest in many ways. The ancient Chinese feel to the game remains intact throughout the gameplay. Red Dragon is a five reel video slot with 25 paylines.

The standard playing cards are the lower value icons in this game. They are the 10, J, Q, K and A but have a Chinese font to them. There are other themed symbols which are the higher value icons. They include a fan, sushi, nunchucks, a hat and a paper lantern. The Chinese warrior is the Wild symbol while the bonus symbol is the stylish but colourful dragon.

Two features make up the Red Dragon slot game bonus action. The Bonus Game comes first. Three or more of the dragon bonus icons on one of the paylines that are in play is needed to activate this feature. You are then moved to a different screen which shows segments of a dragon at the foot of it. Balloons float up the screen and using the lives you were awarded you need to click on the balloons to get prizes. Find the five dragon pieces and you win the biggest prize.

The other feature in the Red Dragon slot game is the Free Spins one. Hit three of the temple icons on the reels and you open up a world of free spins! You get 10 free spins for three temples, 20 spins for four of them and if you fill up a payline with five temples then you’ll be rewarded with 30 free spins. The free spins are welcome but unlike in some games there is not a multiplier attached to any of them and this feature cannot be retriggered so you need to get lucky with the spins you are given.

The RTP rating for the Red Dragon slot game on the low side at 97.32%. That is comfortably above the average for a modern slot game and is certainly on the side of the player.

For a Chinese themed game, Red Dragon is not at all bad, in fact, it may well be one of the better ones that there is as there is a bit of skill attached to the game given the control to the player, particularly in the Bonus Game feature. The Chinese graphics are easy to decipher and the steady soundtrack certainly doesn’t put you off playing the game. If you are a fan of Chinese themed slots make sure you give this one a go.