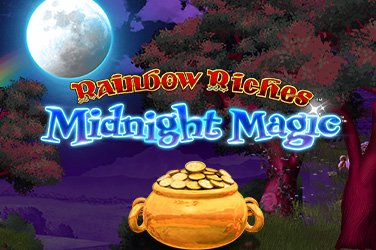 Sequels are always hard to make, but Rainbow Riches never seems to struggle, and thanks to its reputation as one of the most successful slot games of modern times we’ve seen quite a few follow-ups to the original over the years.

One of the first things you’ll notice about the Rainbow Riches Midnight Magic slot game is its updated looks. The original was soaked in light and colour, with almost blinding use of bright blue skies and emerald green fields to give the impression of a magical land. Well, that’s all gone here, replaced by moody shadows and shady corners, though the improbable night time rainbow still stands high above the land behind the reels. The symbols have also been updated, and the original really does show its age now, so that’s a great thing. The low value symbols are still the generic 9 – A with an Irish makeover, but the high-value symbols are lovely 3D renderings of a golden harp, a toadstool, a green top hat. A lilting Celtic tune plays in the background, in case the rest of the Irish jamboree wasn’t enough to set the scene!

In terms of the gameplay, this title doesn’t stray too far from the series playbook, offering five rows and three reels with ten paylines to play on, though there are a few extra features which gamers may appreciate. First of all, there’s the super dial button, which doubles your bet when you activate it, but when two scatters win the super dial spins a wheel to decide what prize you get. This prize could be multiplied up to 6x or some free spins, but you won’t know unless you play! The top-paying symbols aren’t especially generous at 100x your stake, so the ability to double your top bet from £/€/$100 to £/€/$200 is a big deal and makes for an RTP of exactly 96%.

Rainbow Riches Midnight Magic also boasts a fairly standard free spins round that’s activated by landing up to five of the leprechaun scatters, a figure which grants you 20 free spins. There are no extra multipliers or the like on top, but the introduction of the magical fairy can help boost your winnings substantially. She shows up during the free spins round to magically upgrade all the symbols on the reels to match the most valuable one that landed on that spin, meaning that if you land a wild then all the high value symbols on the reels will also become wild.

Rainbow Riches Midnight Magic doesn’t reinvent the wheel, but it does give it a couple of nifty upgrades that we think slot fans will enjoy. The super dial is a great way to add some much-needed spice into a classic and it’s not a mechanic you see much elsewhere, while the addition of plenty of good old fashioned free spins and the fairy’s magic is a great boost to your prize bank.