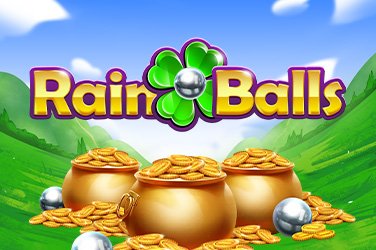 Developed by Skywind, the Rain Balls Slot Game is an Irish-themed video slot with five reels, three rows and 15 winning ways. The game has a fully optimised design that is playable across all devices, including desktop PCs, laptops, tablets and smartphones.

With a Return to Player (RTP) of 96.00%, Rain Balls Slot Game is considered a medium volatility game.

The Rain Balls Slot Game is a colourful slot with an impressive design. The reels sit in the centre of the screen, surrounded by rolling hills, lush greenery and blue skies, all in a cartoon style. There’s a Pachinko area below the reels and a wheel of fortune sitting above.

Symbols-wise, you’ll find a lucky leprechaun’s hat, a golden horseshoe, a pipe, a beer barrel and a hap, with lower-paying symbols including various coloured clovers – red, green, blue and yellow. The wild is represented by the rainbow and is clearly labelled with the word ‘WILD’. It works in the usual manner and can replace all other symbols to help form winning combinations throughout the game.

The Rain Balls Slot Game’s minimum bet sits at $/€/£0.75 per spin, with the highest possible wager limited to $/€/£150.00. It’s possible that those who are brand new to the world of online slots won’t favour the relatively high minimum stake, but with up to 500 times your stake on offer, we think it’s worth a spin.

The key draw to the Rain Balls Slot Game is the Pachinko feature, where you’ll be able to trigger various bonus features including wild reels, extra balls, free spins and the lucky wheel.

The clover symbols can appear with metal balls in the centre throughout the game – forming a winning combination with one of these clovers will see the metal ball be released, tumbling down into the cauldron area at the bottom of the screen. Some of the cauldron’s display icons relating to four possible bonus features, which will be activated if the ball lands in them. They include:

Wild reel. The reel directly above the cauldron will transform into an entirely wild reel.

Extra balls. Three more balls will be added to the screen, falling into the area and increasing your opportunity to trigger other features. It’s possible to trigger multiple features at once by landing the extra balls into more than one of the active cauldrons.

Free spins. Ten free spins will be awarded, with a further two free spins added each time further balls fall into the free spins cauldron during the feature.

Lucky wheel. This will reward you with a multiplier worth up to 50 times your total bet, or one of the three jackpot prizes on offer – mini, major or grand.

The Rain Balls Slot Game is an entertaining slot that offers something different and exciting thanks to the Pachinko feature. It’s possible to quickly boost your prize pot during this feature, particularly if you can trigger the extra balls, which can, in turn, activate the additional bonus features.

It’s raining slots has Casino77. We have other 1000 slots and games to play. Why not check out these slots next Pharaoh, Spin Doctor, Foxin Wins Football Fever and Top Strike Championship.