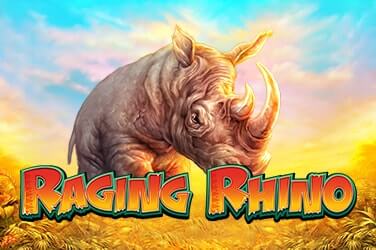 With the sheer abundance of slot games available on the market for casino fans to enjoy, it can be hard for new games to stand out.

So how does Raging Rhino do? Is it horns above the rest, or does it simply fall foul to the weight of the stampede of slots around it? Read our review to find out.

As hinted by its name, Raging Rhino is a safari-themed slot game. Both the visuals and the gameplay itself are influenced by this concept, including a colourful sunset background and an array of symbols that reflect the theme. Some of the best in-game symbols include the gorilla, the diamond, the cheetah, and the crocodile. Each symbol boasts personality and colour in equal measure, making Raging Rhino an entertaining choice of slot game.

Raging Rhino has been brought to players by the dynamic team of Nyx and Scientific Games.

Located in Las Vegas, Nyx has more than enough experience in what it takes to make an excellent quality casino game. The company is responsible for one of the world’s largest gaming portfolios, with more than 650 games actively distributed around the globe. Nyx has also been awarded EGR’s Special Achievement Award, which recognises innovation and consistent growth across e-gaming platforms.

With 6 reels, the maximum Return to Player (RTP) rate for Raging Rhino is 95.91%. This is around the average RTP for slot games, meaning existing players of slot games will know what to expect already. There is a choice of two game modes: Classic and Special.

Raging Rhino is a game that will appeal to lovers of the classic slot game style. With a good 4,096 different ways to win, there are thrills galore with every spin. Some of the features you can expect to pop up include free spins (either 8, 15, 20, or 50 in any one go), and multiplying wilds (up to 400x your stake!).

There are no bonus games available when playing Raging Rhino. The closest to a bonus is the unlocking of free spins by landing three diamonds. You can also choose to play the Special mode of the game if you fancy a little bit more of the speed and fury suggested by the title.

Raging Rhino is a simple yet charming enough game. It’s a good example of the slot genre harking back to its roots and heritage, offering repetitive yet exciting fun with every spin of the slots. The unique 6×4 game engine adds an extra dimension of intrigue for novices and experienced players alike, as it isn’t a standard slot layout.