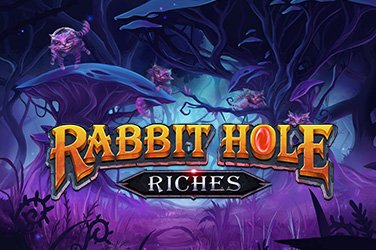 You’re late for a very important date in Rabbit Hole Riches, as you try to help the White Rabbit traverse the strange and dangerous world of Wonderland and capture Alice for the Red Queen.

In case you hadn’t noticed this is a slot set in the surreal imagination of author Lewis Carroll, whose book Alice in Wonderland has inspired dozens of slots over the years, not to mention movies and video games galore. But can you help the rabbit succeed in his quest, or will it be off with your head? Let’s find out in our Rabbit Hole Riches review.

Alice in Wonderland received a relatively recent blockbuster revival starring Johnny Depp, and this is the slot equivalent because it looks top quality and big-budget in every department. The Red Queen’s mad game of living chess is the backdrop for the reels, though many settings from the book appear in the various game modes, each gorgeously rendered and beautifully detailed in draw droppingly vibrant colours. On the reels themselves, the Red Queen’s hapless card-bodied knights serve as low-value symbols while other characters such as the Mad Hatter and the Cheshire Cat fill in as high-value symbols, and the music in the background is all suitably epic and orchestral just like a movie. The animations too are as high quality as you would imagine, with spurting fire and swirling lights combining with coins that spill across the screen on big wins.

Despite all the action taking place on the reels this slot is actually quite stripped back, with just three reels and three rows to play on and five pay lines. As a result, you’re going to struggle to make much cash in the main game, which is really just a way of activating the extensive list of bonuses the Rabbit Hole Riches slot game has to offer and where the real cash is to be found. The maximum bet of £/€/$100 is a welcome sight for high rollers, while less adventurous players will be reassured by the above-average RTP of 96.23%. The key to the bonuses isn’t actually a symbol of its own but an image overlaid onto another symbol, a pocket watch, and landing three of these triggers the bonus game.

Once you’ve landed the required symbols you’ll be taken to a screen in which the White Rabbit randomly chooses one of four mirrors to jump through, with a game behind each one. The Tea Party game spins the reels with only premium symbols on the reels, then charges the player to pick a teacup beneath the reels to reveal which symbol will payout. Once a symbol is revealed you’ll be paid for each instance of that symbol on the reels, then you may be randomly allowed to continue or bounced out of the game. The Cheshire Cat re-spins feature allows you to keep spinning with a giant Cheshire Cat symbol on the reels until you make no more winning spins. The Tower Power game asks you to pick either the red or white tower, then gives you seven free spins, awarding points to each tower depending on how many reel positions the red and white tower wilds take up on the reels. If your tower wins your prize for the round is doubled. Finally, the free spins round grants you free spins with an unlimited multiplier that increases with each spin and unlimited free spins, providing you generate more by landing scatters.

Rabbit Hole Riches does an excellent job of capturing the danger and surrealism of the Alice in Wonderland world while providing plenty of exciting and fun bonuses to keep you entertained and to stuff your wallet. The bonuses really are original and fun enough to make the game worth playing on their own, and the prizes aren’t half bad either!