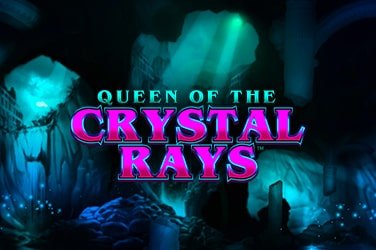 The Queen of the Crystal Rays slot game by Microgaming lies deep beneath the surface – watching, and waiting.

It’s a slot that possesses a whole lot of allure and with that in mind, it’s time for us to take a look and see what it’s all about.

We open up with a somewhat unconventional 6×4 reel setup that spreads across the lower half of the board, with players having between 25 and 50 paylines to work with depending on your bonus tendencies.

We also have several themed symbols including gemstones, artefacts and, of course, the Queen herself.

The return to player (RTP) percentage is regularly used as an important member of the slot family and that’ll also be the case for the Queen of the Crystal Rays slot game. The RTP for this one comes in at 96.70% which is just above the industry average in our book, and with medium volatility, a consistent winning experience is definitely on the cards.

You can put down a minimum stake of $€£0.20 or perhaps even a tasty maximum of $€£50, but the main headline of the day is that punters could leave with just over 2,597x their initial stake.

The colour scheme may be a bit too ‘in your face’ for some players and we can understand that, but we also enjoy the underground vibes that we’re getting from this slot. The design work isn’t perfect, but it’s daring – and the cinema-esque soundtrack is absolutely divine.

The teal and green gem is the wild in this one with there also being a 2x wild – whereas the bonus scatter is magenta and cyan.

The Crystal Ray feature is triggered at random during any base game spin. The Queen will pop up to unleash her powers onto the world, where she doubles the size of the reels to create the aforementioned 50 paylines – alongside added wilds and 2x multipliers.

The Queen of the Crystal Rays bonus feature is where you land three or more scatters on the reels. Four bonus rounds will be awarded in which you can see cash prizes that are available to be won. If you’re lucky, these prizes could then be multiplied by up to 5x.

The Queen of the Crystal Rays slot game is fascinating in that it really does invite you in with a tempting, somewhat seductive gameplay style that keeps us intrigued throughout. The potential winnings are solid, the base game is entertaining, and some would suggest the bonus features are enough to make this a classic. It’s a recommended game to play, for sure, but the longevity and sustainability of it depends on the sort of theme you’re after.