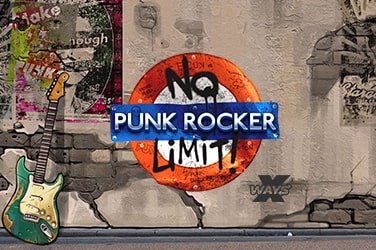 Dust off your denim jacket and black leather boots as it is time to travel back to the 1970s with Nolimit City’s Punk Rocker slot game, which comes with plenty of attitude and style.

One of the newcomers to the online slot gaming market, having been formed in 2013, Nolimit City are based in Stockholm, Sweden, and in that time they have produced some of the most unique and stand out online slots on the market today.

With the Punk Rocker slot game, you can tell straight away they have put a lot of time and effort into making this game look just right, and it comes with an impressive 45,656 ways to win and a load of bonus features to boot.

Visually stunning, Punk Rocker is an in-your-face game that captures the mood and the spirit of the late 1970s in Britain and is a high volatility game that offers an RTP of 96.11%, with a minimum bet of 25p to a maximum of $/€/£125.

The base game gives you 243 ways to win with a 3 row, five-reel setup, but this can be expanded as you go through the game and unlock the bonus features. The game is chock full of London landmarks such as the Underground sign, Big Ben and a red telephone box amongst others.

Some of the lower scoring symbols include other items you would expect to find linked to the punk rock era of the seventies, and these include Molotov cocktails, an anarchy symbol, knuckledusters and Doc Martens boots.

The premium symbols are represented by Andy Warhol-style famous people from across the globe, including Einstein, Winston Churchill and the Mona Lisa who have all been given a punk makeover. Winston is the best symbol on the paytable giving you six times your stake for landing five on a payline unless the bonus feature is active in which case you get 20x your bet.

The wild symbols are the Molotov cocktail and the Riot Respins that replace all other symbols except for the scatter symbol, which is represented by the London Underground logo with ‘Bonus’ emblazoned across it. When you land a wild symbol, it will randomly change the symbols around it either on a neighbouring reel or stack a reel full of them.

Although this game can take a bit longer to get used to, when you do it is a great game to play with the added bonus of being able to win 15,000 times your stake being another big draw, especially for those more committed gamers.