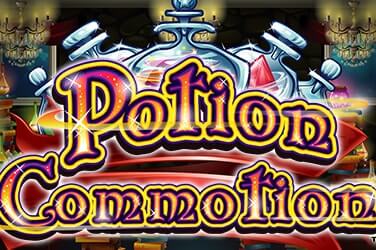 One of the most popular areas of magic has always been the kind that lets you turn mundane objects into gold, and that’s exactly what you’ll be trying to do with these amazing magic potions! Potion Commotion by NextGen gaming presents you with the challenge of matching the potions to win prizes, and has a few surprises up its sleeve with a rewarding free spins round that just keeps getting better and better!

So is there magic in the air, or has this slot gone down the drain? Let’s take a look in our Potion Commotion slot game review.

At first glance, Potion Commotion doesn’t look terribly imaginative. The ‘magical potion’ genre is already pretty played out in slot gaming, and this game doesn’t look to be bringing a huge amount that’s new visually at least. The potions are your symbols, and each one is stored in a different shaped stoppered phial with colourful liquids inside. Unusually it’s the higher value phials that have card suits inside them as well, while the lower value phials are smaller and oval or triangle shaped. The background to the reels appears to be an alchemy lab, where melted candles flicker in the gloom. So far so generic for a slot involving magic, and while it’s perfectly well designed and drawn it’s not very inspiring.

There are a few bright spots, however, such as the charming animations that accompany wins. For example, if you’re only one symbol away from landing a combo, then the reel that has yet to stop spinning will be highlighted by spotlights and a dancing magical spark. Then, accompanied by a drum roll, the reel will stop and reveal whether you’ve won. It’s small, but it’s a nice touch. Elsewhere the payouts are also pretty good, with low-value red potions winning up to 200x your stake while high-value hearts potions top out at 1500x your stake. The betting limits are pretty low, between £/€/$0.20 and £/€/$40, which takes the shine off a little and is reflected in a low RTP of just 95%

The Potion Commotion slot game features a nifty little wild symbol which also pays out as well as substituting for other symbols, granting you 500x your stake for 5 symbols on the reels. There’s also a scatter, the Potion Commotion logo, which grants between 10 and 20 free spins where all prizes are subject to a 3x multiplier. While these are all pretty standard bonuses, the fact that you can re-trigger the free spins pretty easily is a great benefit. You can easily end up with between 40 and 100 free spins in one game, which can translate into some pretty hefty totals in your kitty when the 3x bonus is factored in.

Potion Commotion slot game lives and dies by its bonus round, and because you can activate it fairly easily you’ll spend a lot of time doing free spins. The main game’s design and art style is nothing new, and the betting limits and prizes aren’t anything to write home about either, but you can’t say no to free spins by the dozen!