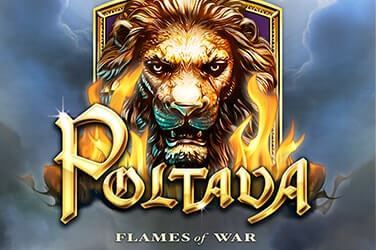 The Poltava Slot Game is brought to you by ELK Studios. This impressive slot is based on a historic 18th century battle between the Swedish and Russian empires – but don’t worry if your history knowledge is limited, as you’ll likely still enjoy the game. The five-reel design offers 40 winning ways and is fully optimised for compatibility with all devices, including touchscreen mobiles and tablets.

With a Return to Player (RTP) of 96.40%, the Poltava Slot Game is considered a medium to high volatility slot.

The Poltava Slot Game’s design is visually impressive, with high-definition graphics that don’t disappoint. Set deep within the forest, the reels span the majority of the screen, but their transparency means we can see trees within the woodland just behind them.

The Poltava Slot Game’s minimum bet is set at $/€/£00.20, whilst the highest bet is limited to a reasonable $/€/£100.00 per spin. These minimum and maximum stakes should attract both new and seasoned slot players.

The wild symbol within the game is clearly identifiable, as it comes in the form of the game’s logo, marked with the word ‘wild’. Like most wild symbols, it works by substituting for all other symbols apart from the scatter.

The Poltava Slot Game’s scatter symbol is represented by the lion, though this is a dual-purpose symbol that can also occasionally act as a sticky wild. If you manage to land three lions in any position on the reels, they’ll transform into sticky wilds, and trigger three Flames of War free spins. Throughout the free spin bonus round, the newly formed sticky lion wilds will remain in place.

The Marching Reels feature is the final feature the Poltava Slot Game has to offer. Whenever an entire stack of battle-themed symbols lands, you’ll notice that they quickly regroup, become animated and begin marching towards the right side of the slot frame, triggering a respin simultaneously. This can happen again, providing a further three combat symbols land.

The Poltava Slot Game is an exciting slot with an excellent theme that is sure to impress history buffs, as well as those who simply appreciate high definition graphics. The simple interface is easy to use, and the accompanying soundtrack helps to create an atmosphere that compliments the overall battle theme and goes hand in hand with the artwork. Throughout the base game, the payouts tend to be on the smaller side, but this is arguably outweighed by the magnificent winning potential the bonus rounds offer. The sticky wilds offer an uncomplicated way of boosting your prize pot with very little effort required.