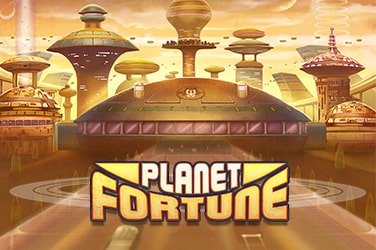 We’re going to take things back to the future with a fascinating sci-fi themed slot known as the Planet Fortune slot game by Play’n GO.

It seems a little bit out of this world, pun fully intended, and it’s about time we explored why.

We open up with a nice 5×4 reel layout that is complimented by 40 paylines – each as important as the last.

Alongside the usual playcard symbols we also have plenty of themed efforts to sink your teeth into, including crystals and gemstones alongside the two main characters: Astro-Adam and Extragalactic-Eve. Do you love it as much as we do?

The return to player (RTP) percentage is always a tricky figure to navigate due to how divisive it is, but it’ll probably never stop being viewed as an important tool to use. The Planet Fortune slot game can’t avoid it either with its reported RTP coming in at between 96% and 96.50%. That leaves it hovering around the average mark but with high volatility, you can bet there are plenty of punters out there who want to give it a go.

Players can put down a decent minimum stake of $€£0.20 before riding that number up to $€£100 if they’re feeling lucky, which could take you down the path of capturing 2,500x your initial stake.

This game moves at a million miles per hour and while we can understand the logic behind that decision, it doesn’t make for the most visually flattering experience. Some of the symbols are cute and the backdrop is nice, but it’s all just a bit much.

The wild symbol in this one is the robot which will also act as the scatter.

The robot can trigger the Robot Revolution Free Spin feature when landing three or more robot wild symbols on the reels, handing you 10 free spins in the process. In this feature all wild symbols will be sticky wilds on the reels, with all wilds walking one spot to the left with each free spin.

There’s also the Magnetic Mayhem feature that can be triggered at random. Here, two or three reels stick together with the two attached reels displaying 2×2 normal symbols – potentially going all the way up to 3×3 symbols on the reels.

The Planet Fortune slot game by Play’n GO has a few areas in the design department that need some work, but on the whole, we actually quite like the finished product.

The winnings are decent and the bonus features give you something to get excited about, even if we don’t think the idea behind Planet Fortune itself is particularly unique.

Nothing about it is likely to blow your socks off but as is almost always the case with this provider, it’s very playable and can easily become quite addictive – although if you want more dramatic winnings, you might want to look elsewhere.