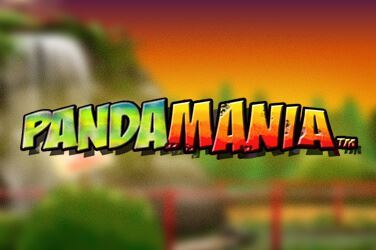 Developed by NextGen Gaming, the Pandamania Slot Game is a zoo-themed game packed with bright, colourful graphics and the chance to win great prizes. The idea behind the theme is that the zookeeper has been tied up and the panda has taken over the zoo, roaming around on the pedal-powered snack cart. It’s a pretty fun theme, and the bonus features are equally as fun. You’ll be able to play on any device you choose, thanks to the fully-optimised design.

With a Return to Player (RTP) of 95.53%, the Pandamania Slot Game is considered a low volatility slot.

The Pandamania Slot Game has an incredibly fun design, with the colourful reels appearing within what seems to be a circus tent. We can see a sign near an enclosure (which explicitly warns us off feeding the animals) alongside a waterfall, a snack cart and some balloons. All of this works well to convey the overall theme, as does the accompanying upbeat soundtrack.

Symbols-wise, you’ll find the usual playing card royals – 9, 10, J, Q, K and A – though they are all brightly coloured with patterned designs in this game. There are also higher-value symbols in the form of a bag full of sweets, a pair of zoo tickets, the tied-up zookeeper, and a pedal-powered snack cart. The panda is the wild within the Pandamania Slot Game, whilst the Pandamania sign acts as the scatter. Look out for the padlock bonus symbol, too.

The Pandamania Slot Game’s minimum bet is set at a reasonably low $/€/£00.25 per spin, whilst the highest bet is restricted to just $/€/£50.00 per spin. Both high-rollers and new slot players should find this an entertaining slot.

At any point during the base game, the escaped panda wild can appear, turning other symbols into wilds simultaneously. This can increase your winnings, so watch out for it!

If you land at least three of the Pandamania signs in any position across the reels, you’ll be rewarded with ten free spins. But, that’s not all – any wins will also be doubled, and there’s the chance to retrigger the entire free spins round if you manage to land a further three or more scatters. The Panda Escape Bonus applies more frequently during the free spins round, too.

The Pandamania Slot Game is an entertaining slot with a fun, energetic theme and excellent graphics. The bonus features are fantastic and offer the chance to increase your winnings significantly. There’s an in-built gamble feature too, and you can choose to gamble on any winning spin – if you’re lucky, there’s the chance to quadruple your winnings with minimal effort.