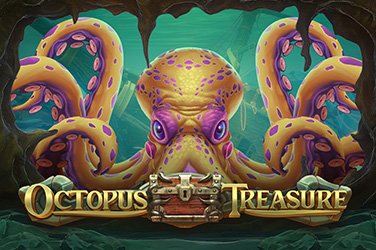 Octopuses are some of the most intelligent species on the planet, which must be where this big fella got all of his cash from because he’s very diligent about guarding it down there on the bottom of the sea.

If you dare to face this huge beast in Octopus Treasure there’s a lot of money to be made among the coral and flotsam and jetsam on the sea bed, but you have to be quick and clever if you want to get out alive! So is the reward worth the risk, or will you end up fish food? Let’s take a look at our Octopus Treasure review!

One of the best things about Octopus Treasure is the way it looks, and thanks to some inspired design work and some detailed art you’ll instantly be immersed in an underwater kingdom. Stacks of coral, shipwrecks, shifting sands and a whole host of surface junk litter the ocean floor, while the reels are bounded by a coral frame, behind which sits the menacing presence of the octopus himself. He bobs in the water and occasionally flicks a tentacle round onto the reels to mess about with your symbols in the bonuses. These symbols are all nicely drawn and unique, including card suits in barnacled coral pieces for the low-value icons, whole the high-value symbols include coins, pots, jugs and a tarnished crown. The whole game feels quietly epic thanks to the rousing score in the background.

The main game isn’t the major focus of this slot thanks to the packed bonus features on offer, and the prizes are pretty low because even with a betting limit of £/€/$100 to play with 2.5x your stake for the highest value crown symbol doesn’t add up to much. It’s all fairly straightforward with five reels, three rows and 20 pay lines, but just remember that this part of the game is something you’re trying to get through in order to reach the bonuses. The RTP of 96.25% demonstrates that you won’t lose much here, but you won’t win much either.

Did you know that octopuses can actually open locks with their clever tentacles? Well, this guy doesn’t have to, because the scatter in this game is a key, and each one that falls on the third reel will allow our octopus friend to open one of the four treasure chests above the reels that contain a random bonus feature. Coins can fall on the screen to activate a pick and win feature, the octopus can grab random symbols to upgrade them, the octopus can grab random symbols off the reels and turn them into cash prizes, or the player can pick one of five pots beneath the reels to turn that whole reel wild. Whichever bonus you activate there is sure to be a lot of cash in it for you, and not only that, activating another feature is only a matter of landing another key scatter. There’s even a chance a random multiplier up to 10x will be added to your winnings from this bonus round.

On top of these generous bonuses, there are also free spins on offer, activated when three pearl scatters land on the reels, granting one spin in which only keys land on the reels. The number of keys that land grants you that number of treasure spins, during which each spin plays out one of the four bonuses mentioned above. You can also add to your treasure spins by landing more keys, making your potential winnings huge.

We were absolutely blown away by the amazing potential of the bonuses in the Octopus Treasure slot game, and we could have written a review just on that element of the game alone. Not only are they fun, diverse and highly imaginative, but they also come packaged with a great looking game and a fun concept to boot. The main game could be more interesting, but who cares when you can play bonuses to your heart’s content!