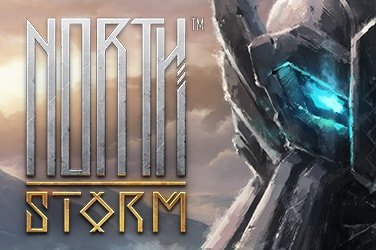 As the latest game from Rabcat and Microgaming, North Storm had a number of expectations set upon it before it was even released.

But does it live up to those expectations as a slot game – or even exceed them? Read on to find out.

As an e-game, North Storm is much darker than its predecessor titles. With a thrilling Nordic-inspired theme, North Storm entrances players with Viking warriors, animalistic bonus features, and other influences from the classic Nordic mythology.

The in-game background itself is striking, with a storm raging behind the slots as you play. The fierce warrior sitting next to the reels is also a cool addition!

North Storm is provided by Microgaming and Rabcat – two international iGaming heavyweights in the industry.

Microgaming is an award-winning online game supplier, creating more than 800 casino games for online players to enjoy. With new game releases across mobile and PC every month, Microgaming has unsurprisingly garnered a loyal legion of fans around the globe.

Since being founded in 2001, Rabcat has prioritised pushing the boundaries of their online games. With a portfolio consisting of slots, table games, 3D games, and more, Rabcat’s gaming dabbles are varied and consistently successful.

Between the two providers, North Storm has innovation and experience in abundance at its helm.

North Storm has 5 reels, offering a total of 25 paylines. This means that, should you fall on a 1000x stake, you can bring home the maximum payout of 50,000. This is a decent offering for a slot game, wherein jackpots could be far higher but also far lower. So North Storm sits in the middle range of jackpot totals. It must be noted that there is no progressive jackpot, however.

The North Storm symbols all stick with the theme of the game, which is Nordic mythology. As such, you play with runic symbols, Dire Wolf wilds, and Warrior scatters.

Though there is no bonus game expected of many slots nowadays, there is a handsome selection of other bonus features for you to try your luck for. This includes multipliers of up to 8x, depending on whether you’re in the base game or free spins mode. The free spins mode lasts for 8 turns, which is a decent length of time to amass some serious multipliers against your stake.

The aforementioned Dire Wolf wild is fun too, offering exciting additional payouts as you spin. With every winning combination, the Bonus Falls feature will be triggered, meaning a whole wave of new symbols will awash the screen to replace your existing ones.

North Storm is an entertaining slot game with features and bonuses aplenty, all of which are sure to be enjoyed by fans of both Microgaming and Rabcat. The stunning visuals and consistent theme are the cherries atop this already tasty cake!