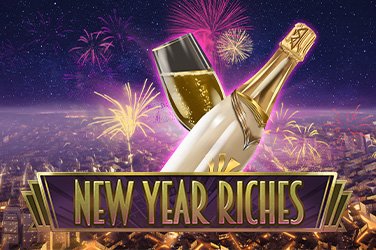 Your next New Year’s resolution might well be to see more of the world or to take in new experiences. Fortunately, with the New Year Riches slot game you don’t even need to leave your living room to tick those two things off!

Play ‘n’ Go’s New Year Riches is packed with positivity and celebration, but does it leave a lasting smile on the faces of punters? Let’s get into the nitty gritty and find out.

New Year Riches whisks people to an around-the-world New Year’s Eve party, with a 5×3 playboard stacked with global landmarks and celebratory items such as balloons and bottles of champagne. Alongside that is a rather uplifting soundtrack that nicely ties in with the positive vibes that the visuals deliver. If you’re the type of player who believes in a positive frame of mind before dipping into any slot game or casino table, you may well find your match with this one.

While the game is extravagant in visual design, players will be pleased to know that is where the intricacies end thanks to a simple gaming format that is easy to follow and delivers consistent wins.

The Returns to Player percentage, or RTP, is a statistic that every slot gamer looks out for, and New Year Riches offers a generous 96.48% RTP, which is comfortably above the industry average. The game plays with a relatively low volatility and punters can look forward to a steady stream of small wins to keep things interesting. Players just need to match up three symbols on one of the game’s 20 paylines to bag themselves a cash prize.

The lowest prizes come when you match up at least three coloured balloons, with the more lucrative wins reserved for the matching up of various landmarks. Keep an eye out for the Statue of Liberty and London’s Big Ben, which carry the largest multipliers. Players are also in line for some juicy bonuses if they trigger a Wild feature by matching at least three rather pricey looking champagne bottles, while a Scatter feature is just around the corner if you pick up at least three clock icons, with the hands slowly approaching midnight. This feature unlocks ten free spins, with multipliers of up to 20x your original stake if you land those more tricky to come by combinations.

All in all, New Year Riches is a very well put together game and is a nice marriage of a simple yet fun concept, alongside straightforward objectives and prize structures. It’s certainly a slot game that leaves you with a positive spring in your step, while it’s steady RTP and solid payline volume makes New Year Riches an excellent all-rounder. If you’re in the mood to party or need something of a pick-me-up then we highly recommend New Year Riches as your cheery go-to.