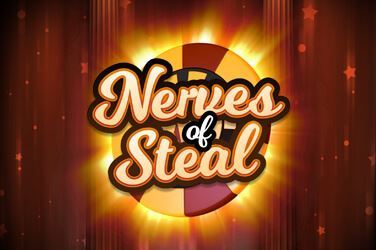 Everyone loves to watch a good game show, whether it be due to how cringeworthy it is or how much tension there is in the idea that anyone’s dream can come true in the blink of an eye.

Today, we’re going to explore this genre in the form of the Nerves of Steal slot game – clever name, isn’t it?

The standard premise of reels and rows are totally abandoned in this slot in favour of a 50-grid board, set out in a 10×5 format. The objective of the game is simple – the player needs to uncover as many poker chips as they possibly can after you set out the number of slots you can choose.

Every time you miss, the next selection comes with an added cost – but with every hit, a sum of money goes into the ‘pot’. The next chip you hit will have an amount displayed above the grid, and from there, you could either cash out or keep building it up to see how much you win, with the player being given four attempts to succeed.

The return to player (RTP) percentage may not be at the heart of everyone’s agenda when they gear up to play a new slot, but it’s still an important tool used by many punters who want to know what kind of rewards they could receive. That’s also true for the Nerves of Steal slot game, although the ‘non-slot’ nature of the gameplay means that the RTP only comes in at 92%. Between that and the volatility not really being a factor, this isn’t exactly a reliable game to play.

It doesn’t take a lot to kickstart your Nerves of Steal journey with a minimum stake of $€£0.50, with the more daring players out there being given the chance to work that figure up to a nice maximum of $€£100. Oh, and just in case you were wondering, the luckiest of lucky players could leave with $€£1,000,000.

We really like the cheesy game show elements that this slot has chosen to implement, but between the rigid gameplay and the predictable nature of the design work, we’d actually say they could’ve gone further.

Those who are going in search of wonderful bonuses and extra add-ons aren’t going to find them in Nerves of Steal, with wild symbols and scatters not really playing a role here. Instead, the focus goes entirely on the base game, ensuring that fans know exactly what it is they’re getting themselves in for from the word go.

The Nerves of Steal slot game is unpredictable, but we actually tend to think it’s quite exciting. Nobody really knows what is going to come around the next corner and even though there are no bonus features and it doesn’t qualify as a proper slot, it’s definitely worth a test run.