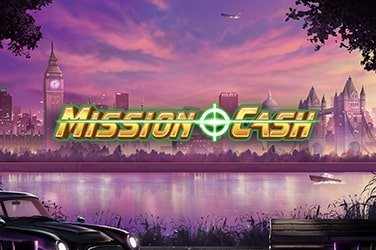 In what can be described as a blend between James Bond and Mission Impossible, the Mission Cash slot game invites us into a world that we’d otherwise never experience.

Today, we’re going to see whether or not the attempt to combine these two themes has paid off.

This spy-operated slot opens up with a fairly standard 5×3 reel layout, but with just 20 paylines to speak of, you’ll need to take your opportunities when they present themselves.

The old contenders make an appearance in the form of spades, hearts, diamonds and clubs, in addition to the agents – Agent Red, Agent Blue, Agent Green and Agent Purple.

The return to player (RTP) percentage is a figure that holds a whole lot of importance within the industry, and the same will be true for those who decide to play the Mission Cash slot game. The reported RTP for this bad boy comes in at 96.65% which we’d say is just above the usual average, and with high volatility, the theming seems to fall in line quite nicely as high rollers have a chance to risk it for a chocolate biscuit.

Players only have to put down a conservative amount of $€£0.20 to get underway with their minimum stake, leading all the way up to a nice maximum of $€£100. However, the real headline stems from the fact that you can win up to 5,000x your initial stake – if you’re fortunate enough, that is.

There’s a comic book vibe to the design work here that probably wouldn’t look all too out of place on an animated TV series, which is a testament to the thought process that has gone into the visual side of Mission Cash.

On every single spin, there will be a crosshair that moves around, randomly landing somewhere on the reels. If it hits Agent Blue or Agent Red then the symbol will expand to fill the entire reel, becoming a wild reel in the process. This brings the Take the Shot Respin feature into effect – whereby the wild reel holds in place for one respin. The crosshairs can also make an appearance in the respin, with the feature ending if Agent Purple, the card symbols or Agent Green are hit, although you can earn up to five wild reels in the meantime.

The Mission Cash slot game by Play’n GO really is a whole lot of fun, and you’d have to be really picky to find any major flaws in it.

The gameplay is decent, the potential winnings are high, and the theming keeps us hooked – what more can you ask for?