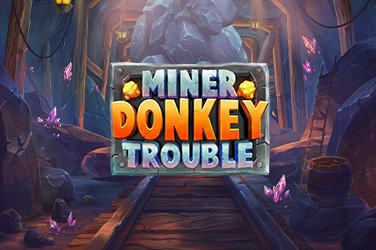 Miner Donkey Trouble is another excellent slot game from Play ’n’ Go, with superb graphics and a quirky theme that is sure to keep slot game fans engaged.

This game is based on the theme of mining – specifically, gold mining, with an old miner and his donkey, Trouble, deep in the mines and hunting for gold. It reminds you of how mines used to work years ago, and the graphics and background images are very high-quality.. Trouble and his master flank the reels, with the game taking place in what looks like an abandoned mine, with candles at the bottom edges of the frame the only light source. The reels themselves are made up of a block of stone, while there are quite a few meters alongside the reels which keep track of various features and triggers as well.

The game has five reels and seven rows, while clusters of five symbols or more on the playing grid will pay. Players can bet from $/€/£0.10 up to $/€/£100 per spin. There is a quick betting panel to help you set your bets for each round, while you can also choose the Autoplay option to quicken things up – simply select the number of spins you want the reels to spin automatically for and get going.

The game has the Cascading Reels feature in place, so winning combinations of symbols are blasted off the reels to be replaced by new ones which drop down to replace them, giving you another chance of winning. This is repeated if there is a new combination formed, and the cascades will continue till no new combinations form.

Every winning combination gets collected in the Donkey Destruction meter, to the side of the reels. There are three stages to this, which get activated when each milestone is hit.

Rocks and gems are the two categories of symbols that will land on the reels, with rocks being the low-value icons and gemstones being the higher-value icons. The rocks will be yellow, green, blue or brown, in descending order of value, while the gems are red, green, turquoise or pink, again in descending order of value. As mentioned earlier, you need to land a cluster of at least five symbols to earn a win, with this going to as high as 18+ symbols in a combo. The red gems can payout 250x of your stake for having as many as 18 of them in a combo, while at the other end of the scale, the brown or blue rocks will pay only 5x for the same number.

A pickaxe and a stick of dynamite form the game’s special symbols, which will help in the bonus rounds, as well see next. Additionally, there are golden nuggets that can drop on the reels as well, but these do not count towards winning combinations. If a nugget makes its way to the bottom row of the grid, it is removed from the grid and the multiplier increases by 1x. All multipliers reset to 1x at the start of a new spin in the base game.

Every time the pickaxe symbol lands, it is removed and the Miner’s Pickaxe feature is queued up. Once winning cascades and any Donkey Destruction and Golden Nugget extras are done, between four and 10 Diamond Wilds are added to the reels to increase your chances of winning combinations.

When the stick of dynamite lands on the grid, we will see the Dynamite Explosion feature, with an explosion that removes the symbol along with any surrounding stone and gem symbols from the grid. A pair of Diamond Wilds get added in their place.

Landing three or more of the dynamite scatter symbols on a single spin will trigger the Free Spins feature. You will receive five free spins, and in this round, the multipliers do not reset at the start of a new spin, and all the other features mentioned above can be triggered as well. The round can also be retriggered for a maximum of 20 free spins.

Play ’n’ Go has provided an excellent slot game packed to the gills with superb bonuses and features. The theme, along with these features, makes this one of the most entertaining games from this developer in recent times, and it is one to try out and savour for all slot game fans.

If you’re having trouble finding the next slot to play, consider Doom of Egypt, Firefly Frenzy, Aztec Idols and The Sword and the Grail.