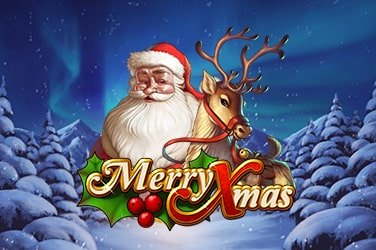 Merry Xmas, released in 2014, is a bright festive slot from Play’n GO themed around everybody’s favourite holiday season. Featuring candy canes, reindeers, bells and baubles, this slot is the perfect game to play on a cold December night. The game’s theme is supported by a cheery orchestral soundtrack with plenty of bells and flutes around to double down on the Christmas cheer.

The drawback of this slot is that there’s likely only a couple of months of the year that most players would want to play it, but otherwise, it really is quite a nice little game.

The highest paying basic symbol in the game is Father Christmas himself, who pays out between 50x and 2500x the bet for between three and five symbols on a payline. Other symbols such as the reindeer and the bauble payout up to 100x and 500x the bet respectively.

Merry Xmas is a relatively simple game; there’s no free spins bonus round on offer here. However, there are two special features which serve to make gameplay more interesting. The first is the game’s standard wild symbols, all of which are represented by a multiplier such as ‘2x’ or ‘3x’, all the way up to ‘5x’. These wilds not only substitute for other symbols on the reels but also multiply any win they contribute to by their number, which can lead to some pretty big wins in itself.

The second bonus feature is nice because of how nicely it fits in with the theme. If players land three of the present bonus symbols on the reels, they pick one to open and see what’s inside. Players can win some pretty generous cash prizes via these presents so choose carefully!

Merry Xmas is easy to play on the go thanks to great mobile compatibility. The slot plays well on both iOS and Android devices including both tablets and smartphones; this makes it perfect for squeezing in a few spins at work or during your commute.

Merry Xmas offers a slightly low return to player of 93.96%, which means that on average, players can expect to win back around £93.96 for every £100 they spend on the game. This is a little low but shouldn’t hamper your winning prospects too much. It’s also a medium variance game which means it’s well balanced for players of all kinds of styles.

Merry Xmas is a nice little slot which compares well to a few other festive slots on the market. It’s not one most players will want to play all year round but during the Christmas season, there’s no reason not to give this game a few spins.