Home » Netent » Mercy of the Gods 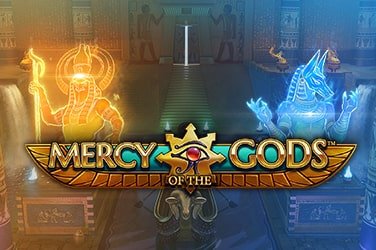 It’s a trip back to good old Ancient Egypt in this latest entry from NetEnt, though this title is actually a sequel to the well known Divine Fortune – a slots game with similar mechanics and aesthetics but set in Ancient Greece instead.

So is this game an oasis in the desert, or a load of quicksand? Let’s find out!

Mercy of the Gods is a progressive video slot game with five reels, three rows and 20 fixed pay lines. It’s another entry into the same series of games by NetEnt, and you can make bets of anything from 20p to $/€/£100 with a maximum win of 1,600 times the original bet, while the progressive jackpot is virtually unlimited.

The game also has a nice autoplay feature, which lets you play up to 500 spins automatically, with a load of settings to help you control your gaming. In terms of the theme, the game looks as good as any of the latest NetEnt titles with slick graphics and animations to really bring the action to life.

All the classic tropes of Ancient Egypt are right where you’d expect them: a pair of Anubis statues flank your playing area and there are plenty of stone hallways, wall paintings and flaming torches. The quality graphics extend to the symbols too, with bejewelled scarab beetles flanked by cobras and golden lotus flowers, which represent the higher value tokens. So what about the all-important bonuses?

This game isn’t as feature-heavy as some of its fellow slots, but it does have a solid line up of familiar bonuses you’ll recognise from is predecessor and other similar games. The first bonus is the Gift of Life re-spins feature, triggered when you hit one or more wilds in one spin. It continues to give you free spins until there are no more wilds remaining on your reels.

You can take this element of the game even further and bag The Gift of Double Wilds, activated when a wild lands behind another wild in one spin. This can be used to extend your Gift of Life respins, and hitting three to five scatters in this mode will gift you anything from 5 to 12 spins.

Finally, collect three gold hearts in a spin to trigger the main bonus round – coins are sticky during this period, and you need to collect as many as you can on your reels to win big. For a potential win that is 200 times your original stake, it’s well worth a go! That’s the biggest attraction of Mercy of the Gods, and despite the lack of complicated features, the prizes are big enough to make it worth coming back to.

Mercy of the Gods is a good alternative to traditional five-reel slots, and though you won’t find much in the way of novelty or gimmicks here, the cold hard cash is a nice reward in and of itself.