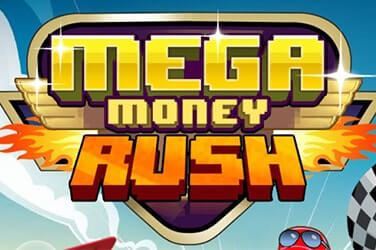 It’s not often you see something truly unique in the world of slots these days, but Mega Money Rush might just be that game. This isn’t the first slot that looks more like a video game, of course, and it’s not the first racing style game that plays like a slot either, but it’s probably the first to pack so many arcade elements into one game before.

Get behind the wheel of one of a number of exciting vehicles and race for cash in this thrilling new concept from Microgaming! Intrigued? Read on in our Mega Money Rush slot game review to find out more.

Fans of old-style arcade games will be delighted because the Mega Money Rush slot game has all the look and feel of a 30-year-old racing game on a gaming cabinet, all the way from the blocky low-res textures to the pumping midi soundtrack. You could be forgiven for wondering if this is even a slot at all, because it looks exactly like a racing game you might play on your phone, and everything from the menus to the options and the levels look like a game too. The whole slot is presented in this classic arcade-style with lots of bright colours and racing scenes depicted in glorious low res pixels, from the simple tracks to the simple cars, boats and planes that you’ll race as you progress through the levels. None of it holds a candle to the advanced graphics you get today, of course, but that seems to be part of the game’s charm. And it’s hard not to be swept up by the old-school sound effects and the simplistic visuals.

It’s hard to know where to start with the mechanics of this game, but suffice to say that there aren’t any paylines, reels or rows in this slot. You start playing by selecting a stage to race on, which will vary the track and vehicle you use to win. This game implements an XP system, which you gain by winning races or extra XP in bonus rounds, and most of the stages are locked behind XP barriers early on until you win some races and gain enough points. Once you’ve picked a stage you place your bet and spin a wheel that allows you to win a range of bonuses such as power-ups to use in the races and extra XP points, and you can only start the race once you’ve landed on one of the two race symbols on the wheel. Once you land on the race symbol you need to spin a second wheel to determine how many treasure chests will be in the race, and these are crucial to your winnings.

The races themselves are simple enough, requiring you to use your arrow keys to move the car around the road collecting coins, which are all worth 1% of your initial bet. The big objective is to collect as many treasure chests as you can, because these are worth much larger sums, and avoid the potholes which dock your cash. You can also use any power-ups you collected in the spin game, such as the coin magnet or shield.

It’s hard to pick out any specific bonuses because the whole game feels like a massive bonus round, but we liked the progressive XP feature best. Each race has the potential to be worth a certain multiple of your bet, so the first can be worth 1,000x, the second 2,000x and so on. You need to grind that XP to reach the more valuable later stages, but with a very high RTP of 97%, it won’t feel like too much of a chore.

Judging a slot that’s this different from all the rest is hard, but it’s really the sort of thing you have to play for yourself to understand. Mega Money Rush deserves a lot of credit for breaking the mould, and we think you’re not likely to find another game that’s this fun and rewarding any time soon.