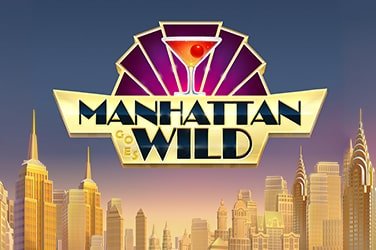 Get ready to party in this slot game tribute to the roaring 1920s, as we join Manhattan’s bright young things for the bender of a lifetime. Manhattan Goes Wild is an appropriate name for this slot, which is dripping in the imagery of that golden, carefree age and its iconic design, it’s memorable fashions and it’s live in the moment attitude.

On top of the atmospheric imagery there’s also a lot of cash to be won, so hold on tight and leave your coat at the door in our Manhattan Goes Wild slot game review.

There’s no doubt where this slot’s head is, thanks to some great design work and lovely graphics that manage to capture the art deco style and architecture of the period to a tee. You’ll be the special guests of Betty and Bugsy, two well-dressed socialites out on the town in Manhattan, with the New York cityscape picked out in golden sunset glow and the prominent Empire State Building and Chrysler Building featured in the foreground. The low-value symbols are the standard 9 – A, but the higher value symbols are all iconic images of the era: Dazzling jewellery, Betty the flapper, a purple vintage car, a bottle of champagne, a lounge singer and tuxedo-clad Bugsy. The sound design is great as well, and a tinkling jazz piano soundtrack accompanies the sleek silver and gold lines of the reels, swelling to an orchestral crescendo as wins are completed.

The celebratory theme continues onto the mechanics behind the game too, and there are 243 ways to win here, so expect the successes to come thick and fast in this game. There are five reels and three rows, as normal, and the betting runs between £/€/$0.10 and £/€/$50, which isn’t exactly enormous but adds up quite nicely when you win frequently. The highest paying symbols Betty and Bugsy reward you with 5x your stake for a combo of five, and the RTP is an average 96.1%, so there’s definitely some cash to be won.

What would a celebration of the gilded age be without some nice bonuses? This game packs in four, and you’ll definitely think these are the bee’s knees. The first two are relatively simple, randomly triggered, and in this feature either Betty or Bugsy will be replaced by gold versions of their symbol. This acts as an extra wild for the spin. Similarly, the third feature also involves Betty and Bugsy becoming wilds if their symbols land stacked on the reels simultaneously. If this happens they’ll both turn gold and remain fixed in place for one respin.

The final bonus round is the biggie: Manhattan Free Spins. Land three or more cocktail scatters anywhere on the reels and the party kicks off, the Manhattan backdrop switches to an imposing blue-tinged night scene, and fan-shaped Art Deco symbols unfold from each row. These are meters that represent each of the high paying symbols, and each time one of these symbols lands on the reels during the free spins the meter fills up. When it reaches capacity, that symbol becomes wild for the duration of the free spins and you get an extra re-spin, while Betty and Bugsy award three re-spins.

The Manhattan Goes Wild slot game is a great looking and fun slot that perfectly captures the spirit of the roaring twenties. If you’re a fan of the era, the style, or you just want a slot that looks a bit different, this is a great choice. The bonuses are fun and original, and while the 2000x your stake maximum win isn’t massive, you’ll enjoy earning it anyway!