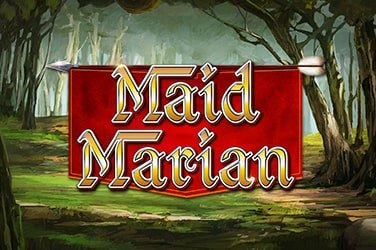 The legend of Maid Marian stems from the iconic Robin Hood story, with Marian serving as the underrated heroine who never really gets the same kind of shine as her better-known counterpart.

Today, through reviewing the Maid Marian slot game, we’re going to try and change that.

The 5×4 reel layout allows the background theme to really shine through in Maid Marian, but with just 20 fixed paylines, you’ll have to really seize your opportunities as and when they present themselves.

The standard play-card symbols are there for all to see and they work in association with the themed symbols, such as the Maid Marian logo, a treasure chest, bow & arrow, wanted poster and more.

The return to player (RTP) percentage is important and while some would prefer to escape that truth, we’d rather look it dead in the eyes and face it head-on – because many players still use it as a guiding light. The same will probably be true for the Maid Marian slot game with its official RTP coming in at 95% which is definitely below the standard industry average. However, with medium volatility, a smaller but more consistent collection of wins are certainly possible.

The majority of players won’t have too much trouble in getting started here with the minimum stake being 20p and the maximum stake being a decent valuation of $/€/£60. Plus, from that point on, you could win upwards of 400x your initial stake – although this information is rightly questioned.

The sense of adventure that is so often created from a Robin Hood-themed game is present in the design work here, even if the gameplay itself could do with a bit of fine-tuning.

The purple Wild logo is the wild symbol and will substitute itself in place of all other symbols outside of the Marian bonus and the archery target.

The main bonus feature, the free spins, is triggered by landing three or more Marian bonuses on the 1st, 3rd and 5th reels, giving you an initial eight free spins. They can’t be retriggered, but this is where the archery target comes into play because if it lands on the 3rd reel, you will be given five Locked Spins – meaning the target and wilds will remain in the same place for the duration of those spins.

The Maid Marian slot game heightens the tension nicely, offers some decent enough payouts and has an easy storyline to follow. It isn’t going to blow you away and any high rollers out there would probably choose to spend their money in different places, but this is one of those slots that fits in with many different genres and types of players.

Maid Marian isn’t going to be overtaking Robin Hood in notoriety anytime soon, but we’d like to think games like this take her a few steps closer.