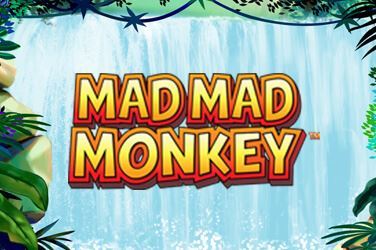 The Mad Mad Monkey slot game is a fun one which was brought to us by the excellent team at NextGen Gaming, who seem to thrive in this kind of machine. This one was released in July 2011 so it has been around for a while and stood the test of time.

The visuals for Mad Mad Monkey are very good. The reels are set in front of a background which is deep in the forest and there are plenty of colours which appeal and catch the eye. Everything is easy to navigate and there is a fun soundtrack to the game too. Even though it has been around for a while, Mad Mad Monkey can be played on desktop, mobile and tablet devices.

Follow the crazy monkey around the reels for the chance to win handily in this fun and entertaining Mad Mad Monkey slot game! The machine has five reels and 50 paylines with the slight difference being that there are four rows in play rather than the usual three.

There is a nice array of icons being used in the Mad Mad Monkey game with the lower paying ones being the card symbols – 10, J, Q, K and A, while the higher valued ones including nuts, coconuts, snakes, parrots and bananas. The monkey himself is the key symbol in the game. This is the Wild/multiplier symbol.

There are a few different bonus features in the Mad Mad Monkey game. The first comes in the form of a multiplier. When you land the monkey icon on any of the middle three reels you will get a 2x multiplier. Monkey Wild stacks all appear from time to time which can increase your winnings substantially.

There is also a bonus game which is known as the Super Stack Free Games feature. This is launched when three or more of the Mad Mad Monkey logos drop anywhere on the reels. Once this happens you’ll get 10 free spins which all come with a 3x multiplier. This game can be retriggered once so you can get up to 20 free spins in total. The Monkey logo remains a key symbol during the free spins because it comes as part of a winning combination that will carry a 6x multiplier!

The Mad Mad Monkey slot game comes with an RTP rating of 95.40% which is below the average for a slot game, which goes against the player.

There is a lot to like about the Mad Mad Monkey slot and a lot of enjoyment to be had playing it. The base game delivers lots of small wins and then you can get some decent sized wins in the main feature as well which will entice plenty of punters to this slot. The low to medium variance of this game means it can be played without too much risk, so with the pleasant sounds and the catchy graphics, this is a game which has to be tried.