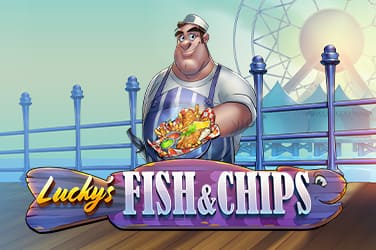 Fish and chips is one of the most quintessentially British things out there, and Eyecon have decided to take this theme and turn it into an interesting and entertaining slot game that could also give you some big rewards.

The game takes you to a classic seaside resort, with a Ferris wheel and other joyrides in the distance, while you are at a wooden pier. You will hear the hum and buzz of a crowd in the background, as well as a fun, nautical-themed soundtrack, while the reels themselves have a wooden frame, with an anchor and a float tied to them to give even more of a nautical feel to proceedings. This is a game with five reels, four rows and 100 paylines, with the paylines being adjustable, so you can choose from having one to all 100 of them active. Winning combinations are created by landing at least three matching symbols on a payline from left to right. Players can bet from $/€/£0.10, going all the way up to $/€/£50 per spin.

The symbols and icons on the reels are all themed as well, with even the standard card royals from A to 9 being styled to look like fish scales. The high-value themed symbols include a portion of mushy peas, a bottle of vinegar, a packet of chips, a fish and a seagull who is also nibbling on a chip. The fish and chip platter is the game’s Scatter symbol, while Lucky, the owner of the shop, is the Wild. The seagull can pay out up to 30x of your stake if you land 5 of it across a payline, and is therefore the most rewarding symbol. The Wild will expand to cover the reels and also add a 3x multiplier to any wins that it is a part of. The Wild only lands on reels 1, 3 and 5, and can substitute for all other symbols except the scatter.

Landing at least three of the Scatter symbols will trigger the Free Spins feature. Three, four or five of the scatters will give you a prize of 5x, 15x or 300x of your stake, respectively, while you will also get 15, 20 or 25 free spins respectively for the bonus round. This round can be retriggered up to 15 times, meaning that the maximum potential free spins to be earned is 400, while the expanding wilds feature is active here as well. This could give you as much as a 9,000x win.

While the game itself is pretty simple, it is a pretty unique theme, and the cartoon-style visuals certainly help make it extremely attractive. There is the possibility of picking up some big wins through the Expanding Wilds feature and the free spins round, and overall, this should be a game that appeals to all sorts of online slot game fans.