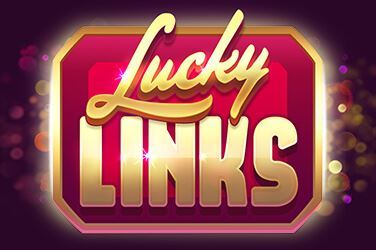 Not all slots have to be bursting with originality and brilliant new concepts, and often it’s better to make a really good version of a tried and tested favourite than it is to fail trying to do something new. There’s no clearer example of that than Lucky Links, a game which doesn’t break the mould but delivers a boatload of good, old fashioned slot gaming fun.

Symbols you know and love, decent payouts and an inventive bonus round make this a fun and nostalgic game to play, but will you feel lucky or lost? Let’s find out in our Lucky Links slot game review!

As the name would suggest, this game is themed largely around luck and lucky objects, and everything in Lucky Links reminds you of that fact. The deep purple background, the gold sparks behind the reels, the lucky horseshoes, lucky sevens and lucky acorns as high-value symbols: everything is there for a reason, and even the crystal card suits that are the low-value symbols look good. The animations and sound effects aren’t much to write home about, feeling like pretty generic slot sound effects, but it all combines handily to become more than the sum of its parts and deliver an experience that’s engaging and exciting.

While this slot plays mostly like an old fashioned video slot, there are a few exceptions which help make Lucky Links even more exciting, such as the four rows and five reels that go along with the 20 pay lines. The betting limit is also something to take note of because it stands at a very high £/€/$250 per spin, so there are plenty of chances for you to bet big and win even bigger. There is also a win both ways feature implemented, designed to help you make the most of the wins when they come, and for good reason: the symbols in the main game don’t pay all that well, so you won’t make a fortune by hitting those combos alone. To do that, you have to take advantage of the other part of this game’s name, the links.

The Lucky Links slot game has one bonus feature, and it’s not a traditional one that’s separate from the rest of the game, but activates during the main game to help boost your wins. As more of the same symbol appears on the reels, the symbols in question will get a gold square around them, causing more of the same symbol to stick to the growing block of matching symbols and generate big wins. Because of the lesser payouts in the main game, this is a vital feature to activate, and can seriously boost your winnings.

Lucky Links is the best of both worlds, a game that blends tried and tested elements from older slot games with some newer features that have spiced up the latest games. While the payouts in the main game aren’t great you can’t deny that the bonus really gives it a shot in the arm, and the high betting limit means that there’s real potential to make a fortune with just one or two lucky spins.