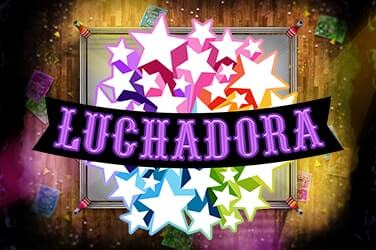 Brought to you by Thunderkick, the Luchadora Slot Game is an energetic slot with a Mexican wrestling theme. This exciting game is packed with several smart bonus features and has a typical five-reel by four-row layout, with 30 fixed paylines. The design is optimised so that you can enjoy the same experience on your smartphone, tablet, laptop, or desktop PC.

With a Return to Player (RTP) of 96.20%, the Luchadora Slot Game is considered a high variance slot, so you’ll need to exercise a little patience before you see any big wins.

The Luchadora Slot Game is based around the Mexican ‘Lucha Libre’ wrestling style. The theme is evident in the background of the game, which features a wrestling poster filled wall. As expected with Thunderkick slots, the visuals are fantastic. The theming doesn’t stop with the graphics, though – interestingly, the game had a unique feature which includes four special corner positions at the top and bottom of the first and fifth reels, which represent the corner seats in the wrestling ring. When a wrestler lands in one of these corner positions, all other matching wrestlers will turn into wilds.

There are four wrestler symbols in total in the game – El Toro, El Serpiente, El Pantera and El Rayo – and four coloured peppers, a Lucha Smackdown symbol, the Luchadora icon, and the Misterioso Campeón Symbol (otherwise known as the Mysterious Champion). The Luchadora icon is the most rewarding, offering 250 times your total bet value if you manage to land five.

The wilds within the game can substitute for all other symbols in view, apart from the Lucha Bonus and Lucha Smackdown symbols, which cannot be replaced. You’ll only be able to activate wilds when a wrestler lands in one of the previously mentioned corner positions.

If you manage to land a wrestler in one of the corner positions during the free spins round, it’ll become wild together with all other matching symbols on the reels and remain so for the duration of the free spins. Potentially, you could play all 15 free spins with four wrestler wilds locked in. If you get all four wilds, the La Luchadora symbol will replace the Underdog symbol, offering higher payouts worth up to 250 times your stake.

The last symbol to watch out for during the bonus feature is the Lucha Smackdown, who can multiply your bet by 15 times, or provide up to an extra seven free spins each time it lands. It also can land in an unclaimed corner of the reels, converting a wrestler into a wild which will stay for the remainder of the round.

The Luchadora Slot Game is an excellent, action-packed game which won’t leave you feeling bored after a couple of spins. The bonus features are impressive, and there’s the chance to land some fantastic wins with the sticky wilds and multipliers.