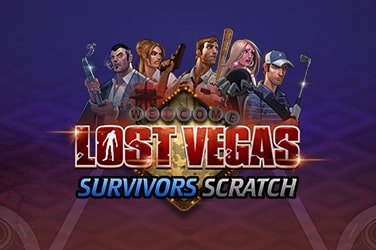 Simply yet effective gameplay experiences will be had by those who check out this Lost Vegas Survivors Scratch game review!

Microgaming’s Lost Vegas Survivors Scratch online slot game features an expertly drawn visual experience as Casino77 players will feel as though they have been taken to a Las Vegas casino lobby as they will be able to see a variety of different table games and slot machines all available in the backdrop of this game.

Perhaps a little eerie in regards to the theme, the casino appears to have been abandoned as it is empty and the games still have dice, cards and chips all laid out, although that perhaps is just something that helps to enhance the theme given the name of the game.

Players will find that there is a playing grid that consists of a 3×3 layout, although there are no typical paylines available in this game. Instead, this Lost Vegas Survivors Scratch review found that players simply need to match 3 icons to be able to form a win.

As mentioned earlier in this Lost Vegas Survivors Scratch review, players are required to match 3 of the icons available on the paytable of this game to trigger a win.

Each of the characters that have been used have been provided with expert designs, with the guy in blue being followed by the woman with the baseball bat, the man smoking and holding a gun, the lady with a molotov cocktail and the sheriff whilst the icon depicting all of them together will award players with the biggest reward of 250x the bet!

It should be noted that whilst there are no real Lost Vegas Survivors Scratch bonuses to really speak of in this game, it is incredibly easy for players to follow and play. Indeed, it could be argued that there are no other games as simple as this one, which will appeal to the casual players at Casino77, as well as those just looking for a less-than-intensive gaming experience.

The return to player (RTP) rate for this Lost Vegas Survivors Scratch is 96% and remains fixed throughout the entire duration that Casino77 players play this online scratch game.

Those that decide to give this simple scratch game a play after reading this Lost Vegas Survivors Scratch game review will love what Microgaming have provided them with, as they have adopted a straightforward formula that will allow Casino77 players to have an incredibly enjoyable gameplay experience and one that can end up being lucrative!